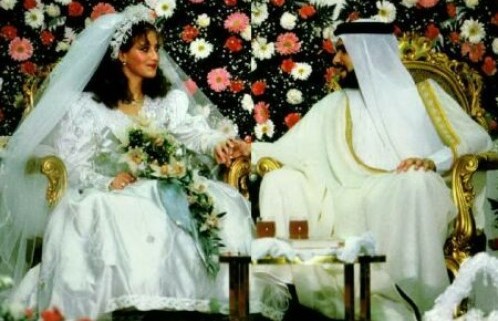 In another half-measure, the Saudi Shoura Council voted to permit Saudi males to marry women from other GCC countries with no reservations. Marrying women from other countries will require approval by committees to be formed in each of the provinces. This is a slight improvement, at least in terms of efficiency, from the current situation which requires approval from the central government. While this Saudi Gazette article does not list the ‘other restrictions’ that may apply, I suspect that they refer to men holding certain jobs within the Saudi government, including the military.

This does not guarantee that the regional committees will approve of more or different marriages, of course, but it does suggest that the time it takes to get approval should be shortened.

The new bill does not address the right of Saudi women to marry foreigners, however. This is still a very tendentious issue within Saudi society.

RIYADH: The Shoura Council Monday approved a bill by an absolute majority allowing Saudis to marry foreign women, according to a report carried by the Arabic daily Al-Hayat. The bill was agreed upon, with certain restrictions, after a lengthy and heated debate among the Council members.

The draft law allows all Saudis to marry women from the Gulf Cooperation (GCC) states because of the relationships between these countries and their common social characteristics.

The bill has adopted a moderate and flexible stance toward the marriage of Saudis to women born to a Saudi mother and foreign father and vice versa.

The bill stipulates that the couple’s marriage should be approved by the emirate in the region which has to set up a committee to study the applications.