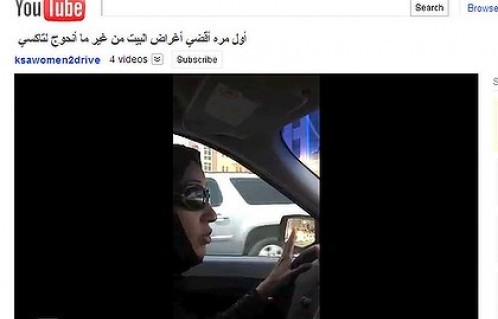 June 17th has been set as the date for women in Saudi Arabia to unite and take their rightful places on the streets – behind the wheel.

There is no organized meeting place, no fanfare. Just a call for women with valid international drivers licenses to take to the streets on this day and drive. A Facebook Event Page has attracted almost 13,000 who have pledged that they will participate.

Women in the rural areas of Saudi Arabia drive without any problems, but city women are forced to hire drivers or taxis or depend on male family members to drive them. Sometimes women have even had to break the law by driving to save the lives of their loved ones. And imagine how humiliating it is for a woman to be denied the right to drive yet there seems to be no problem at all with her pre-pubescent son getting behind the wheel. This movement to allow Saudi women to drive has garnered the support of many Saudi men as well. Crippling half the population of the country by restricting women from driving themselves places undue stress on the men who must drive them and economic hardship on many families. Abdullah Alami, a well respected Saudi economist and writer, even organized a petition campaign to lift the ban against women driving and presented the signed forms to the Saudi governmental advisory body called the Shura Council.

I have written many times about my perceptions of the lack of freedom for women in Saudi Arabia, but the topic I have focused on the most has been the ban on women driving within the country. The reason for this is because not being allowed to drive in KSA has personally affected me and my quality of life in Saudi Arabia, and not in a good way. There is nothing in Islam that forbids women from driving. Saudi religious scholars, however, have determined that men would lose control over women who are able to drive themselves. Since prevention of immorality is such a big part of Saudi culture, women are forbidden from driving.

Some brave trailblazing Saudi women have already begun driving and have even posted videos of themselves at the wheel. They include:

Najla Hariri in Jeddah is an experienced driver who holds an international drivers license plus licenses from two other Middle Eastern countries. She was inspired to act by the protests in the Middle East earlier this year. Najla is a 45-year-old mother of five who has the full support of her husband and her family in her quest to drive in Saudi Arabia legally. Najla was quoted as saying, “In this society I am a little bit brave. I am not scared.”

Manal al-Sharif was arrested this past week by the religious police when they spotted her driving. Her motivation to get behind the wheel was the extreme frustration she experienced one night on her way home. “I had to walk on the street for half an hour looking for a cab. I was harassed by every single car because it was late at night and I was walking alone,” she told CNN. “I kept calling my brother to pick me up, but his phone wasn’t answering. I was crying in the street. A 32-year-old grown woman, a mother, crying like a kid because I couldn’t find anyone to bring me home.”

SaudiWoman wrote this in depth post on her blog about Manal, the controversy surrounding the planned driving event for women on June 17, and the opposition to it – like calling for the whipping of women who dare to drive in Saudi Arabia.

Manal al-Sharif didn’t set out to be a hero or a revolutionary. She just feels that Saudi women need to start speaking up for their rights. Driving is just a starting point. There are many other women’s issues that need to be addressed like the outdated male guardianship system and women’s employment issues, just to name a couple. In the video below, Manal tells CNN about a well-known saying in her country: “The rain starts with a single drop.”