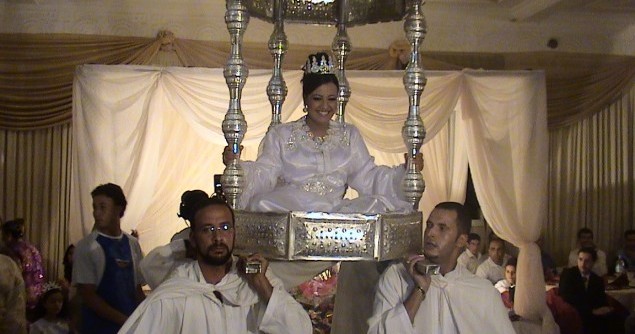 According to a recent report in Le Soir, estimates from the Moroccan High Commission For Planning (HCP) found the median age for marriage in Morocco was 31 for men and 27 for women.There are many reasons for this – more years spent studying, and the high cost of housing and wedding ceremonies being the most obvious. Some, it seems, now want to add monogamy to this list of reasons why young Moroccans are getting married later in life.

The idea might seem absurd at first, but in a country where rape victims have been forced to marry their rapists, it’s really not so surprising.

Abdesslam El Bouraini, the president of the National Order of Religious Notaries argues: “The median age for marriage increases more and more, while women can’t find husbands. So why don’t we modify the polygamy law to allow men to marry several women?” Supply and demand, if you will.

In Morocco, polygamist marriages are almost non-existent because of strict legal restrictions: a woman has to sign consent, and in case of divorce, assets have to be divided among the wives.

Fouzia Assouli, the president of the Federation for the Democratic League of Women’s Rights (FLDDF), says El Bouraini’s proposal is “mind-blowing. There is no scientific evidence to support this notion, and it’s a violation of human rights and women’s rights. Celibacy is also a personal choice,” she says.

What if Morocco faced the opposite situation? “In Saudi Arabia, women outnumber the men, should we allow them to have several husbands?” asks Assouli. “If Islam allows it, then it’s for the good of the community, otherwise, it’s an open door to debauchery. The legal restrictions on polygamy have driven men and women to have extra-marital intercourse,” believes El Bouraini.

If we are to believe him, Morocco’s strict polygamy laws are the reason why men commit adultery. But isn’t excusing adultery and infidelity contrary to the basic principles of Islam? If polygamy was the solution, there wouldn’t be high rates of single people in the countries where it is common.