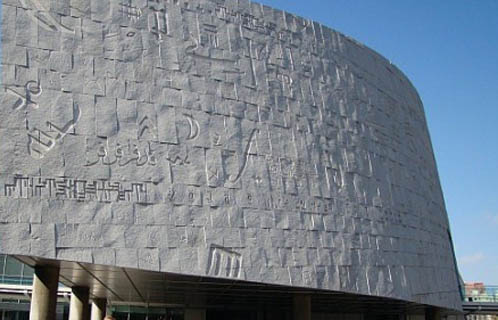 The Wall Street Journal‘s Michael Z. Wise comments today that the Alexandria Library—or Biblioteca Alexandrina—has become a symbol of the “New Egypt.” Indeed, we have seen protesters linking arms and taking shifts to protect the Biblioteca in a beautiful show of support for a nation’s cultural institutions.  Not one window has been touched, according to director Ismail Serageldin. Not one book has been harmed.

This is the near-term fate of the massive, sea-side cultural project: It is safe and tidy and locked up.

Good enough. But if the Biblioteca Alexandrina is truly to participate in a new, freer, more just Egypt, then at some point it will need to crack open its doors a little wider.

During a trip to Alex a couple years back, my husband and I tried to bring our two sons to the great new library. After all, libraries in Cairo are few and far between: This was an opportunity for us to roam some real stacks. When we walked up, the space outside the Biblioteca buildings was promising, thronging with people.

However, to get indoors, one needed to acquire a ticket and pass a security gauntlet. Memberships were available, but—at least at the time—few people outdoors seemed to be members. Egyptians and residents were charged 4LE to access some of the buildings (2LE for students, 1LE schoolchildren). Children under six were not allowed in. I lied about my son’s age.

When my elder son and I finally made it into the lovely, enormous children’s library—my husband was left out in the food court with our younger son, who couldn’t pass for six—we were the only visitors. Eventually, one other girl arrived, and she encouraged my son as he put on a puppet show in a large, empty puppet-theater space.

All in all, the children’s Biblioteca felt less like a public institution and more like an exceptionally pretty museum display. Indeed, it felt less accessible than many of Egypt’s museums.

We have not tried to go back; perhaps the space has become more welcoming to the public in the intervening years. Certainly, the Biblioteca has great possibility, and director Ismail Serageldin’s statement in support of the protesters is heartening.  But I would not yet call the library a symbol of “New Egypt.