The Creep of Totalitarianism in the Face of Terrorism 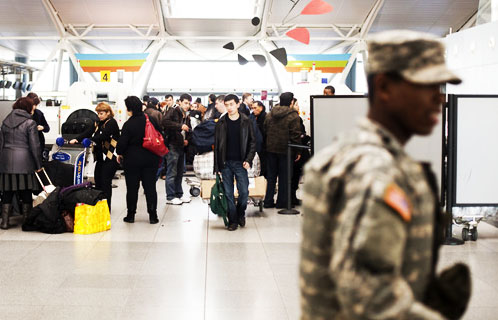 The story linked here popped up in one of my feeds, not sure which. I read it with growing horror – a half-Arab, half-Jewish woman and two Indian men were reported for ‘behaving suspiciously’ on a flight that had landed in Detroit from Denver.

Note it had landed, not that it was waiting to take off.

The plane was moved to a secure area and all three were removed from it by armed officers. They were cuffed, searched, held in cells for hours, strip searched and interrogated. I do heartily recommend you follow the link above and read her account – it makes for frightening and depressing reading.

Given my own recent experiences with airport security, it once again made me wonder quite why we are all putting up with this. Totalitarianism and terrorism must not be allowed to dominate our societies, and yet with this type of ‘security’ that’s just what’s happening.

For more, see also:
9/11: Muslim Americans Mourn the Loss of the U.S Ideal of Fairness and Freedom
Democracy: More Valued by Arabs than Americans?