A Half Day in the Life of ‘the Last Arab Jew’ 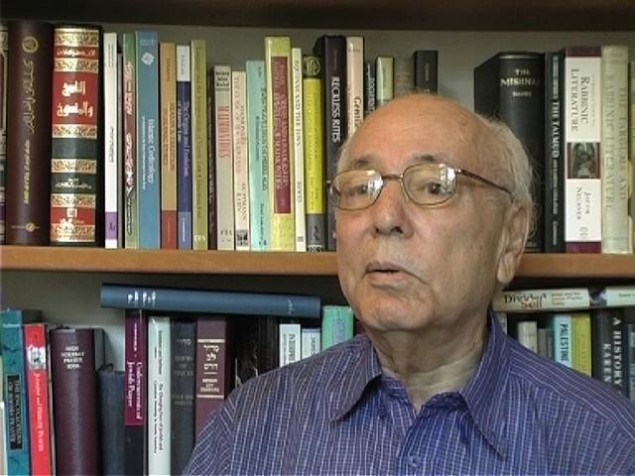 With all the uncertainty in the air, these are troubling times for Arab-Israeli relations. But one man insists on keeping his feet firmly planted on both sides of this chasm.

Sasson Somekh describes himself as both a Jew and an Arab, as both Iraqi and Israeli. This poet, academic, writer and translator of Arabic literature into Hebrew invited me to spend “half a day” with him, in a witty allusion to a little-known short story by Egyptian Nobel laureate Naguib Mahfouz. Penned in the latter years of Mahfouz’s prolific career, this allegorical tale relates the events of just half a day in which the narrator enters the school gate for the first time as a young boy in the morning and emerges as an old man in the afternoon.

“How could all this have happened in half a day, between early morning and sunset?” the elderly narrator of the story asks, perplexed.

I wondered the same, as this sharp-witted tortoise of a man, slow of body but swift of mind, sailed through time and space to take me on a riveting journey from the contemporary Israel of his silver years back to the disappeared world of his youth, Jewish Baghdad (which he eloquently evokes in the first part of his memoirs, Baghdad, Yesterday), via the literary salons of his middle age in Egypt.

Born in Baghdad in 1933 into a well-to-do, middle-class Jewish family, Somekh remembers summers spent swimming in and picnicking by the majestic Tigris River. “Those were the most enjoyable days of my life”, he recalled wistfully.

At the time, Jews comprised as much as a third of the Iraqi capital’s population. “When you walked down Baghdad’s main street, al-Rashid, half the names on the shops and offices were Jewish”, he noted.

The ancient Jewish presence in Iraq led to some interesting cultural symbioses: Iraqi Jews traditionally wrote Arabic in Hebrew script and Baghdadi Jews spoke a vernacular that had died out among Muslims and Christians. Jews also affected Iraq’s daily life. For example, Somekh recalls some Shias who worked for Jewish businesses switching their own day of worship to Saturday.

During his teenage years, Somekh was a promising young poet who hung out in Baghdad’s vibrant literary salons and managed to get some of his poetry published. But his youthful dreams of a glittering literary career in his homeland were rudely interrupted by history and the shifting tectonic plates of geopolitics.

Though the vast majority of Iraqi Jews played no part in what befell the Palestinians, they were nonetheless blamed for it. And by 1951 the situation had become untenable.

Iraqi Jewish refugees in Israel were, like the Palestinians, settled in makeshift camps, a huge step down for the Somekhs from the comfort and prestige they had enjoyed in Baghdad. But eventually the family got back on its feet, and the young Sasson Somekh refused to give up on his literary dreams. “Literature is literature. Politics does not enter into it”, he told me with disarming simplicity.

Somekh not only became involved with the only Israeli literary magazine in Arabic at the time, he also redoubled his efforts to learn Hebrew so that he could translate Arabic poetry into this new-old language.

Somekh’s crowning achievement was to become one of the foremost authorities on Naguib Mahfouz. When Somekh first took an interest in the Egyptian novelist, Mahfouz was almost unknown outside the Arab world.

Intellectual interest soon blossomed into an improbable and controversial (given the Arab boycott of Israel) friendship between the Egyptian writer and his Israeli critic. The two men kept up a correspondence for years, and the pen pals were finally able to further their friendship when Somekh moved to Cairo in the mid-1990s.

“Our two peoples knew extraordinary partnership”, Mahfouz once confided in Somekh. “I dream of the day when, thanks to the co-operation between us, this region will become a home overflowing with the light of science, blessed by the highest principles of heaven.”

And it is this vision of eventual Arab-Israeli conciliation that Somekh – who describes himself as the “last Arab Jew” because his is the last generation of Jews that clearly remembers living in peace among Arabs – seems to have dedicated his life to through his attempts to build bridges of cultural understanding.

Though he admits that his efforts have not yielded any significant results, he labours on regardless. And perhaps one day, in a more peaceful future, we will look back on Somekh and Mahfouz and others like them not as misguided eccentrics, but as bold visionaries.

Khaled Diab is an Egyptian journalist, blogger and writer currently living in Jerusalem, who has divided his life equally between the Middle East and Europe. His website is www.chronikler.com. Follow him on Twitter at @DiabolicalIdea