Mubarak: Trial of Century Must Be Beyond Reproach 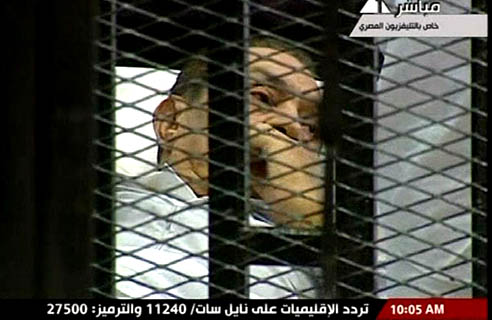 On August 3rd, as the entire Arab world watched with rapt attention, a legal circus unfolded in the police academy building in New Cairo, temporarily designated as a courthouse. While inside lawyers shouted over each other, and one went so far as to demand a DNA test as he believed the real Hosni Mubarak had died in 2004, outside street clashes took place between pro- and anti- Mubarak protesters and riot police stationed there to “keep the peace”. The importance of this trial can barely be understated, and it is for this reason that it must be held in conditions entirely above reproach. In this regard, the process has thus far been only a partial success.

Judge Ahmed Refaat, who will be presiding over the trial, is of flawless repute, with a track record of fairness and good judgement. Significantly, he has previously demonstrated an unwillingness to bow to political pressure when he released sixteen members of the then-illegal Muslim Brotherhood. His presiding over the trial will increase its credibility, and help to preserve a distance between the goings-on in the courtroom and the highly politicised debate surrounding it.

The decision to publicly televise the trials of those accused of Mubarak-era crimes was made by a judge on July 12th, after protesters at the Tahrir sit-in, concerned with a lack of transparency, made it one of their central demands. Conflicting reports regarding Mubarak’s whereabouts and health added to the protesters’ fears that the army were deliberately delaying the trial in order to shield Mubarak from justice. These fears appear to have been well-placed as Mubarak’s lawyer has dropped hints of a strategy involving discrediting General Tantawi, leader of the Supreme Council of the Armed Forces (SCAF) which is currently running the country, by calling him to testify as a witness. Had this statement been made behind closed doors, the opportunity may have presented itself for SCAF to silence Mubarak with offers of a deal or an exemption, but with the eyes of the world watching a miscarriage of justice will be harder to engineer.

Where the trial has been mishandled, however, is in its presentation and insistence on delivering traditional Egyptian justice. It has a certain poetic justice; Mubarak who himself ordered hundreds be caged and put on trial is now himself brought down to this level, but this is where the justice ends, and what the caged man actually represents is injustice come full circle. The degrading experience he put so many through, he is now enduring, and while the sight of Mubarak caged has done much to quell protesters rage, the reason for the cage is entirely symbolic, and it is a symbol which needs to be swept away with the rest of the old regime.

The cage serves no practical purpose, it represents incarceration and therefore implicitly, guilt. The sight of a caged defendant fundamentally undermines the notion of innocent until proven guilty which must form the basis of any unbiased criminal justice system. Although it is understandable that revolutionaries, and the families of martyrs, feel gratification at seeing their once arrogant and tyrannical leader brought so low with this symbol of powerlessness, the aim of the revolution was not just to wrest power from Mubarak and see him brought to justice, but to build in the place of his fiefdom an equitable and fair democratic state, where people are treated with dignity.

As Amr Hamzawy, political commentator and founder of the Masr Al-Hureyya Party (Freedom Egypt Party) stated in the Egyptian daily al-Shorouk on the morning of the trial:

This is a great day for us. Let us not spoil it by saying the wrong thing, by promoting a culture of revenge, or by failing to treat the former president with respect.

Defendants have a right to dignity, and granting dignity to someone who never himself bestowed it would be a symbol greater than that of the cage itself; that the new Egypt has morally transcended the regime it was born from the ashes of, a symbol of hope for the future.

This trial is not just important for Egypt, but is central to the future of the Arab Spring. It is an historic moment for the region, the first time a popular uprising has succeeded in bringing its own oppressor to justice during peacetime. With former Tunisian President Zine al-Abidine Ben Ali having being tried and sentenced in absentia, it is vital that this trial go off without a hitch, and strike a resounding moral victory to cast fear into the hearts of those dictators still clinging to power.

As Saleh, Al-Assad and Gadaffi watch this trial, the message must be clear: no one is above the law, and everyone will someday be held to account for their actions. For protesters across the region the message will be even more powerful: your struggle is not in vain, justice can and will be served. Egypt must continue to be an inspiration for its neighbours, and in order to do this it must do more than seek revenge, it must seek justice.