Building Bridges Through the Art of Graffiti 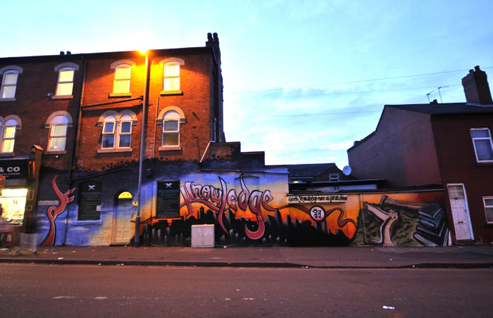 We hear government officials, academics and politicians talking about the problems of multiculturalism and community cohesion, but I feel they have left one resource untapped when it comes to finding solutions: art.  In fact, I often make the bold statement that graffiti art has the power to change the world.

Art that is bursting outside of conventional art spaces, outside of galleries, and is quite literally spilling onto the streets is an amazing means of connecting people. Murals I have painted on busy street corners have brought people together as every day perhaps thousands ponder the messages of the art I create.

Those who have seen my work say it brings together the best of both worlds. My pieces are an amalgamation of two almost opposite extremes, in terms of art forms at least. I take street art, born on the streets of the West, and combine that with a sacred, classical style of Islamic script and patterns – introducing this art form in places where I have permission to paint.

This is my personal attempt at challenging the notion of the “clash of civilisations”. The art I create actually merges two civilisations and communicates a unique message that we can be inspired by spirituality and faith, but that we should learn to apply these to modern life. We can deal with contemporary issues and connect with others in doing so.

In the post-9/11 world, Islam has come under the spotlight and is often portrayed negatively by the media and misunderstood by non-Muslims. Amid the negativity, I feel encouraged to stick my neck out even further, go against the grain and express who I am without any insecurity hindering my efforts. Despite this hype about Islam, I feel good about being a Muslim living in the West. I can be inspired by my faith, yet also contribute to developing a harmonious society.

It’s an important time to challenge these stereotypes and encourage real dialogue between ordinary people with different ideas, identities and backgrounds, not leave it to faith leaders sharing tea and biscuits.

Art is one way of facilitating this dialogue. In my art, I convey principles – peace, justice, brotherhood and respect – that I believe are fading away from our modern societies, but which I highlight to make people aware that they do in fact share common principles. For the average Joe or Jane who travels to work during rush hour traffic, and for local residents who walk past a particular mural every day, I want the walls that carry my messages to come alive and remind people of these shared principles.

Man has forever told his story by carving or scratching his message into a wall in a public space. Graffiti has been around for thousands of years, way before the spray painted subways of New York. So before we throw out the baby with the bathwater and view graffiti as something that is only for mindless youth, I ask everyone to stop and realise that we are all graffiti artists. It is an innate part of man’s nature. After all, when we are on the phone and we have a pen in our hand, what do we do? We create our own graffiti.

Let’s harness the energy and power of the spray can, and use our public spaces to convey something colourful and meaningful to deal with some of the problems we face in the world today.

Mohammed Ali is a UK-based artist whose work can be seen at www.aerosolarabic.com. This article was written for the Common Ground News Service (CGNews).

Mohammed Ali is a UK based artist, who believes that art has the ability to change the world.