Learning English in the Kingdom: ‘Could Do Better’ 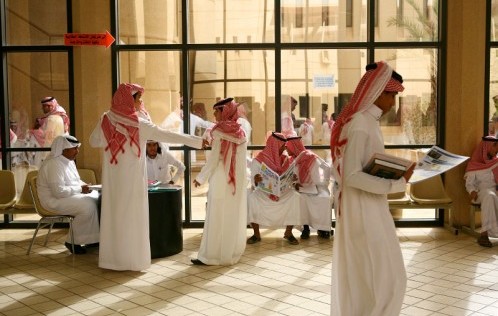 Learning a second language is work. It’s usually hard work, so hard that some people simply cannot do it. For others, it comes easily; that’s just the way the individual mind works. But learning English has become necessary in today’s interconnected world. English, whether a byproduct of colonialism or a consequence of the advances of science and technology in English-speaking countries, has become the lingua-franca of the age.

Saudi Arabia spends a lot of money in trying to teach English to its students, but as this Arab News article notes, they’re not doing a very good job of it. Even Saudi English teachers are deficient, according to those interviewed. Part of the problem is just which ‘English’ is being taught. While it is one language, there are many variants that are not always mutually intelligible. Grammar may stay the same across them, and spelling to a large extent, but pronunciations and word choice can vary immensely among, for example, South Asian, American, West African, and Australian forms. Deciding which form should be the focus of education is not a trivial exercise. The choice is fraught with meaning, from what it says politically and how much is ultimately costs. Still, the choice must be made.

The article points out that early learning seems to be more effective than trying to learn at older ages. That’s likely true. Right now, Saudi English teaching starts in the equivalent of the 6th Grade in state schools, but in Kindergarten at private schools. Even those few years seems to make a difference, though it may be hiding other factors – like parental engagement and encouragement – that also have a great effect on learning any subject.

As long as English is seen as suspect, there are going to be problems. If parents can be brought to realize that having competence in English is not a challenge to Arabic and Arab traditions, teaching it can succeed.

JEDDAH: Nobody can underestimate or belittle the significance of English as a global or universal language. It is a powerful means of communication and interaction for people all over the world that helps them not only to interact with each other but also with finding a job, doing business, undertaking foreign trips, taking examination, doing research, surfing the Internet and so forth.

Despite being among the most widely spoken and understood languages, English has not yet acquired its customary omnipresent status in Saudi society, where all official work is carried out in Arabic.

Even though the Saudi government is making every effort to promote learning English as a second language at its schools and universities in addition to extending all financial and logistic support to establish this language for over 80 years ever since the Kingdom’s foundation in 1927, is it has not rooted itself yet in society.

There are more than 800 study hours devoted to teaching English from the first grade of intermediate school up to the final year of secondary school. Even then, the standard of English learning is still at the lowest level globally. Most students who graduate from universities are not in a position to speak fluently or write even a letter or paragraph in English.