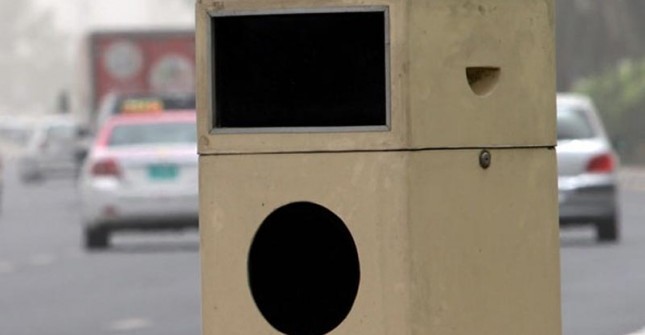 As eagle eyed observers will recall from earlier posts, Sharjah has been suffering from a mysterious and expensive spate of radar shootings.

Someone has been regularly taking out the traffic radars on the Mileiha Road – the arterial route that leads from the notorious National Paints parkabout all the way out to the delightful East Coast littoral of Khor Kalba across on the other side of the Hajjar Mountains. It’s a delightful drive, BTW – and you can pop across the border to Fujeirah for a bite to eat for lunch before coming back, say, over the Masafi/Dhaid road.

This morning’s drive to work took me along the road from Sharjah Airport to junction 2 on the aforementioned Road To Mileiha. That connecting road contains, among many other things (including a co-op and loads of huge palatial villas) two radars.

Standing by the second one was a copper and a couple of puzzled looking blokes. The radar on the northern carriageway (one of the expensive new models) had been pretty comprehensively smashed. If that was a bullet, it presumably means the perp’s still at it. Now all we’ve got to wait for is Gulf News rehashing that quote they use every time they report on a new radar ‘kill’:

“We are collecting evidence from the spot and will soon nab the person who committed the crime. We will find out what motivated him to commit such a crime.” He goes on to add, “The person responsible for shooting the radar will be arrested soon. “He will be punished according to the UAE law.”

It’s no laughing matter for Sharjah’s finest, by the way – that’s now a total of 15 radars ruined and, at Dhs250,000 apiece, we’re talking about almost four million Dirhams. To give it a sense of perspective, that’s almost four days’ revenue from the RTA’s Sharjah-bound Salik gates!!!

When they catch him, the radar shootist is undoubtedly in for the high jump in no small way!