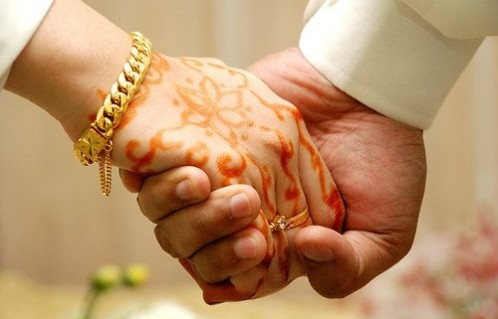 Many marriages in Saudi Arabia continue to be arranged marriages.  However that is not to say that the bride or groom do not get a choice in the matter.  They do.  But if a bride and groom are brought together through family it is rare for either to reject the match.  An arranged marriage in Saudi Arabia is usually made through the bride or groom’s circle.  Matches are generally arranged through women in the family and being a conservative society, matches will be made through families already known to the women.  First cousin and second  cousin marriages continue in Saudi Arabia.  In other cases marriages will be arranged through families who have married in to the women’s circle of contacts.

The young couple are given a short period of time they are allowed to talk.  Usually both the young man and woman have questions prepared they wish to ask.  By the end of the meeting the couple generally decide whether they wish to marry.  Most couples do agree to marry and are now engaged.

This part of the Saudi courtship is kept very private and closely held.  Therefore if after meeting either the young man or young woman do not wish to marry there is less of a loss of face.

A couple may be engaged for a period of several weeks or for a period of several years.  That depends on the families.  During the engagement period some couples may receive further opportunities to get to know one another; others may not.  How much contact or if any contact prior to the marriage is dependent on the families and how open they are.  Most young Saudi couples today do keep in touch via phone calls, text messages and email.  The more contact between a young couple prior to marriage the less feeling of marrying a stranger.