Hip Hop Hijabis: The Rhythm and Rhyme of Debate 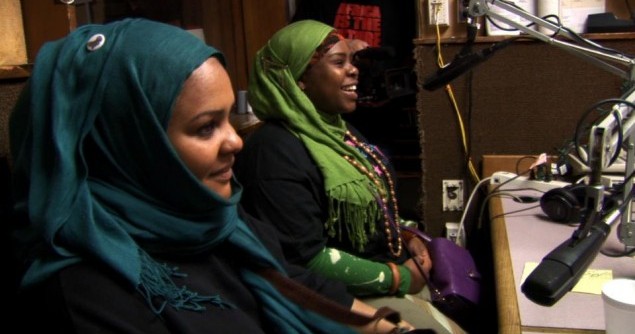 A recent parliamentary report in the UK reveals that some Muslim women are removing their headscarves and anglicizing their names to improve their chances in the job market. Two best friends featured in the upcoming documentary film Hip Hop Hijabis did the exact opposite.

Born in Bristol to Jamaican parents, they converted to Islam in 2005, started wearing the hijab and changed their names to Sukina Abdul Noor and Muneera Rashida. Together they are known as the Hip Hop duo Poetic Pilgrimage and have toured internationally to critical acclaim.

It is estimated there are a total of 100,000 British converts to Islam, a majority of them are women and a growing number are black youth from the inner cities. Combined with immigration this has made Islam the second largest religion in the UK at around 5 per cent of the population according to the latest census data.

Polls indicate that roughly half of all Britons think that is too many and that “Muslims create problems in the UK” reports an Evening Standard article on 11 December 2012. Yet evidence compiled by Islamophobia author Chris Allen shows that two thirds admit to knowing “nothing or next to nothing about Islam” and get most of their knowledge from the media, which the Leveson Report on British press culture recently described to be biased in their coverage of Muslim stories.

By gaining insight into the mindset and daily lives of two outspoken female Muslim converts, Hip Hop Hijabis aims to dispel some of the misconceptions that cause such polarised views, especially around the issue of gender equality, which was a major concern for Sukina and Muneera when they initially felt drawn to the religion.

Researching the question further they found that in historical terms Islam was radically egalitarian, – condemning the common practice of female infanticide and introducing rights of inheritance, divorce and education for women at a time when they were generally considered their husbands property. They also learnt that customs such as female genital cutting and honour killings predate Islam and are not sanctioned by the Quran.

By speaking out against these cultural traditions from within an Islamic framework, Poetic Pilgrimage is part of a growing number of Muslim artists, activists and intellectuals reclaiming their religion.

Doing so through the language of Hip Hop has unintentionally become a statement in itself, as some interpretations of Islam consider music and female performance to be forbidden.

The advantage is that through their skilful rhymes, catchy beats and positive energy Poetic Pilgrimage can reach a wide audience, – both European Muslim youth who may be feeling trapped between cultures, and non-Muslims, whose stereotypes are efficiently challenged by two hijab-wearing rappers.

Though Hip Hop and religion may initially seem like unlikely partners, they both stem from a strong desire for social justice, and there have always been a large number of Muslim artists within the genre. A wide network of educational initiatives has developed around it, encouraging creative expression through Hip Hop as an alternative to violence, drugs and other destructive behaviour.

Extremism has been dominating the public debate around Islam for too long. There are many highly educated and outspoken Muslims who think that justifying misogyny and violence in the name of Islam is a gross misinterpretation of their faith, but their voices are rarely heard.

Conflict and tragedy simply make for better headlines but also breed fear and hate on both sides of the divide with potentially fatal consequences.

The Hip Hop Hijabis project is an attempt to redress the balance and contribute to a more nuanced debate. It will include creative workshops, lectures and public debates to encourage constructive dialogue and counter religious extremism as well as Islamophobia.

Mette Reitzel is a Danish-born London-based documentary filmmaker. Post-production will be partly financed by pre-sales of the film. Get yours and watch the trailer here http://www.sponsume.com/project/hip-hop-hijabis.