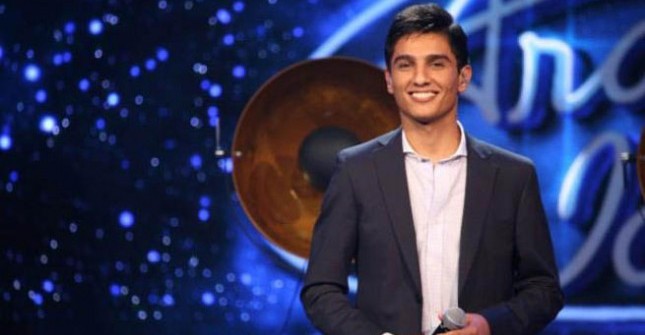 Lebanon’s Arab Idol 2013 competition isn’t over, but it’s already made a star of 22-year-old finalist Mohammed Assaf, a Palestinian student from Khan Younis refugee camp in Gaza, a sensation causing swooning hearts all across the Arab world with his renditions of love songs and patriotic Palestinian songs. Like “Song for Palestine, ‘Oh you bird going back home” (above).

It’s easy to understand why Palestinians are going crazy for him. Mohammed Assaf has drawn comparisons to the late Egyptian nightingale Abdel Halim Hafez, one of the Great Four of Arabic music; Mahmoud Abbas has called him to say he has made Palestine and the Arab world proud; his poster is hanging in homes, restaurants and stores all across Palestine; the international media say he’s finally united Gaza and the West Bank, where one of my correspondents tells me people have set up “huge screens and watch him in the street and cheer for him.”

How did this happen? It’s a thrilling story of overnight success, capped by Assaf’s knockout rendition of “Zeina wore her anklet” from last Friday’s top ten finalist competition (below).

Mohammed Assaf was a popular local Palestinian talent before he set off from his home in Khan Younis to begin his journey to the Arab Idol 2013 auditions in Cairo. According to my Gazan contacts, his first song recorded in 2008, is “really popular here. Everyone knows it.” But the story of Mohammed Assaf’s ascension reveals a tenacious, creative, determined and charming steadfastness, in a word,sumud.

It was no small task for Assaf to travel to Cairo to audition for the wildly popular show.”He needed a visa (to cross the Gaza-Egypt border), but he didn’t have one,” his father, Jabar, told CNN from Khan Younis, a refugee camp in Gaza. Israel imposes a blockade on Gaza, leaving residents without access to an airport.

Palestinian officials had to make special arrangements for Assaf to leave Gaza, his mother, UmShadi, a math teacher, explained. By the time he arrived in Cairo, the doors to the venue where auditions were held had already closed.

“So he jumped the wall,” she said. Security guards seized him and were going to escort him out when a Palestinian official with the show recognized Assaf from his performances in Gaza and gave him a candidate number, allowing him to compete.

When asked by judges on the show why it took him two days to travel the 250 miles from Gaza to Cairo, Assaf simply replied, “problems at the crossing and such.”

Assaf is one of seven children. “We are refugees!” his father proclaimed. “We only dreamed he would get to this point and show the world his beautiful voice. Now we want him to win!”

“Palestinians are not the way (the world) see(s) them,” he explained. “They like to be happy. They like to sing.”…

Mohammed Assaf’s Wikipedia page tells a slightly different version of events: after Assaf jumped that Cairo fence, he sang for the guards, who then let him through. But then he couldn’t get a number to audition and “sat hopelessly in the hall where other contestants were waiting for their turn. He started singing to the contestants.  A Palestinian man who was suppose to audition heard him and gave him his number and told him that I know I won’t reach to the finals but you will.”

Here are the lyrics to the song above, “Song for Palestine ‘Oh you bird going back home.'” His rendition of this song now has over 4,500,000 hits on YouTube, and it includes an original mawwal inserted into the verses at :52 in the video above:

Oh you traveler, you make me jealous
Palestine is my beautiful country

Don’t forget the Arab Castle, Nazareth
Tell Bissan, its people are coming back

Oh Jerusalem, my tears are scattered
My people is, around the world, scattered

History is proud of us,
for my people have beared a lot

Pass to Gaza, kiss its sands
Its people are brave and its men are strong

Jerusalem, the capital, and AlAqsa its center
May Allah unite us with its land.

It’s no wonder Assaf is fast becoming a legend.  You can vote for him by following his Facebook stream and his official FB site.