Added on 26/06/2011  Mondoweiss  Basketball , Football , Gaza , Palestine , United Nations Relief and Works Agency for Palestine Refugees in the Near East 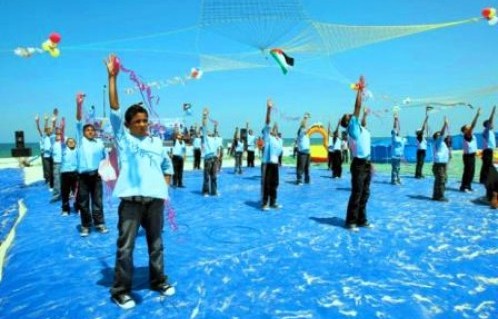 The 2011 Gaza Summer Games opened on Thursday with an Olympic-style torch relay through the Strip. 57 kids carried the flame thru Gaza and finished the marathon with a ceremony lighting a huge torch placed on the top of UNRWA’s Headquarters, ushering in six weeks of sports, swimming, arts and drama. The flame inside my heart for Gaza grows brighter everyday, I wish I could have attended!

250,000 Gazan students participate in the summer program now in its 5th year.

For the past two years, children in Summer Games have proved they can be the best in the world by breaking three Guinness World Records – in kite flying and basketball bouncing.

This year, they will be attempting to break four Guinness World Records:

14 July: Most dribbling a football. 2,024 children (no current record)