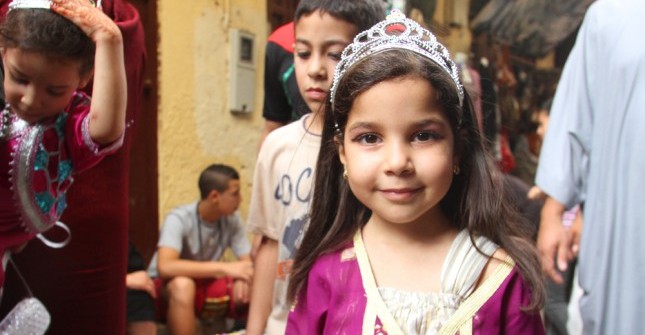 A few days ago The View from Fez wrote about a project being run by SOS Children, a UK-based international charity which supports orphaned and abandoned children worldwide. One of the interesting things about the way they operate is that their Africa project, Our Africa seeks to give young Africans the power to show Africa the way they see it.

The Our Africa project gives children the means of planning, scripting, shooting and editing their own videos about what it is like growing up in Africa. They began by running a series of workshops with a professional cameraman, who worked with children to help them develop the basic skills they would need to produce a film from start to finish.

After the workshop, a number of the children involved took a camera away with them and gathered footage about their daily lives. The range of videos created by children across Africa is extraordinarily rich and really does have to be seen to be believed. The films they produced are immensely watchable, and variously they are informative, funny, moving and intriguing. All of them are eye-opening.

Our Africa began primarily as a resource for schools – children in Africa would teach children in the UK what life is really like for them, escaping from the cliché of universal poverty and misery while not ignoring the darker sides of life. In its capacity as an educational resource, it has been immensely successful. But the videos children in Africa created have achieved a far wider appeal than anyone ever envisaged. They are accessible not only to children, but to adults too, and everyone can learn a great deal from these remarkable children.

Last year, as testament to its success, Channel 4’s Jon Snow presented the team behind Our Africa with the prize for New Media at the prestigious One World Media Awards.

In Morocco the films reveal much about the heritage and history of Moroccan society. One example is Couscous Friday in which Faduoa talks to her mother about the traditions behind couscous, a simple enough dish which when left in mum’s hands becomes a feast for the whole family. We learn not only about a Moroccan food culture, but also about the importance of family in Faduoa’s household, and the significance of food in the religious week.

But Faduoa’s mother perhaps best summarises the importance of good food in a language we can all understand: “When you are tired after working all day, you want to come home to something beautiful and tasty”.

Faduoa and her friend Rafik take us through many key aspects of Moroccan life, and their view of it is bright and optimistic because they are children. This speaks to the mood evoked by Our Africa as a whole, and the only way to get a true sense of this wonderful vibe is to log on and start watching.

SOS began working in Morocco in 1985 when the first SOS Children’s Village in Morocco was established at Ait-Ourir, about 40 km from Marrakesh at the foot of the Atlas Mountains. Built in traditional Moroccan style, it has fourteen family houses. The nursery, as in all SOS Children’s Villages, is also attended by children from the surrounding area. In Marrakesh itself, there are five SOS Youth Homes that are home to the older children making the transition from family life to independence, under the guidance of a youth leader. A primary school was added in 1999 specialising in children with special learning needs.

SOS opened a second community at Imzouren in 1988, between the foothills of the Rif Mountains and the Mediterranean coast, about 20 km from Al Hoceima. The ten family houses are built in local traditional style and, like Ait-Ourir, the village has a nursery and a primary school (again, specialising in children with special needs).

Morocco’s third SOS Children’s Village opened in 2000. SOS Children’s Village Dar Bouazza is in a suburb of Casablanca, about 15 km south of the city centre, and was built on a site donated to SOS Children by the Moroccan royal family. The village has eleven family houses and a nursery and there is a separate youth house in the city centre. In 2001 an SOS Social Centre was built for handicapped young people, providing them with agricultural training and employment. Dar Bouazza also has a vocational training centre for SOS staff. A Family Strenghthening Programme started operating in 2011, and can help up to 140 children.

A fourth SOS Children’s Village opened at El Jadida in 2006. There are 12 family apartments for orphaned and abandoned children.

A fifth SOS Children’s Village in Agadir opened in 2008. It has 14 family apartments for up to 126 children, and it is located in the centre of Agadir.

Alongside these projects, are SOS Social Centres in Casablanca and Imouzzer Kandar, which together help over 1,000 children.

You can find out more here SOS Children Morocco