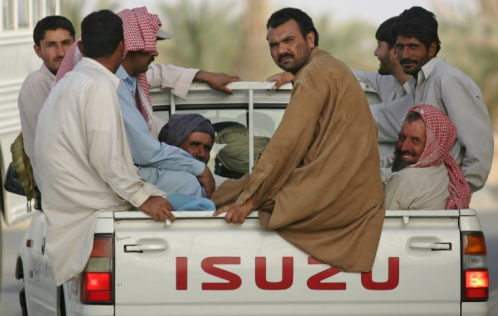 The Saudi government has its new Saudization plan, Nitiqat. That program forces employers to meet various levels of jobs for Saudis depending on the size of the business. An inevitable result will be the reduction of certain classes of foreign workers.

The Saudi media, though, seems to be undertaking its own project to demonize foreign workers. Today, two pieces in Arab News suggest that foreign not only represent a security threat to the country, but that those workers aren’t going to find what they’re looking for anyway.

The first piece focuses on ‘illegal workers’. This categorization doesn’t only include those who lack the visas and paperwork to be in the country, but also those who are present legally, but are holding jobs and positions for which they are, by law, ineligible.

AL-HASSA: Despite the Kingdom’s relentless efforts to regulate the employment market, there are still a huge number of illegal workers.

Their large-scale presence and involvement in illegal acts and crimes pose a grave security threat in addition to numerous other problems, including a flourishing black market for visas and cover up activities (where foreigners take over the running of a business in return for a monthly fee to the registered Saudi owner).

These illegal immigrants have become a time bomb that can explode at any moment. Their presence in the Kingdom drew attention to another reality — the greed of some Saudi citizens who allow their workers to go out in search of any job. They do not care whether these foreigners under their sponsorship engage in any illegal acts. Their only concern is to get their monthly share of money from them, according to a report in Al-Riyadh Arabic daily.
…

Even those present legally, though, aren’t faring all that well. Gone are the days where skilled foreign workers could earn multiples of what they might earn at home. Unskilled labor, coming predominantly from very poor countries, are still doing all right. They do earn enough to minimally support themselves in Saudi Arabia and still have enough to left over to send back to their families. All in all, expats manage to send$7.1 billion back to their home countries annually.

JEDDAH: Despite the general idea about expatriates making fortunes because they work in Saudi Arabia or other GCC countries, many foreigners state that “all gains from GCC countries are all lost.” Arab News spoke to a number of expatriates living in Saudi Arabia, who talked about their experience after long years of work outside their countries.

Hassan Al-Youssef, a Syrian engineer working in Jeddah for the past 27 years, confirmed that his financial situation was good, but that he was not as wealthy as many of his relatives thought. “Most of my relatives in Syria think that I get a high salary and keep it in the bank. They sometimes say, ‘Why don’t you return to Syria? What are you going to do with all that money?’ They ask these questions without being sure about my real financial status. They imagine me very rich, but the truth is I’m not,” he said.
…

I would note that the growing animus toward foreign workers is not restricted to Saudi Arabia. The GCC countries are in process of pushing out foreign workers to favor their own citizens in employment.