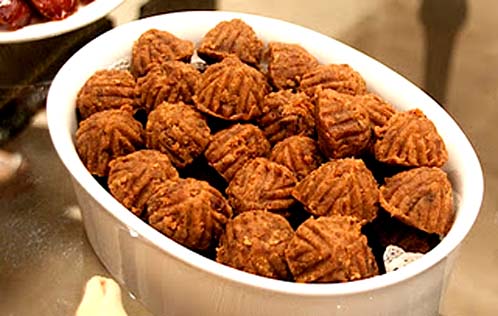 Batheeth, a sweet date and spice mix shaped with a mammoul mould to form little cakes.

The United Arab Emirates is officially 40 years a nation, as of December 2, yet considering many believe Mesopotamia to have been the birthplace of civilization, and factoring the nomadic nature of the people who have previously populated the Arabian Peninsular, it’s hard to celebrate the day without bringing in some truly old arts. And my favourite art? Won’t take you more than one guess – food.

It’s a source of much chagrin to many who live here – it’s easy to find food from the middle east in the region, but to find something essentially Emirati? Nigh impossible. For National Day celebrations at my sons’ school, I have volunteered to introduce the children to some Emirati food. The suggestions I had been given were hummus (Levantine), baklava (Turkish), pita bread (Greek) or shwarama (broadly middle eastern, probably Lebanese). The only place I have eaten authentic UAE food is the Cultural Centre, for breakfast.

So, being completely unable to contemplate deep-frying lgeimat in front of the children, I was fortunate enough to join Arwa, of La Mere Culinaire at her home, so I could learn a little about my favourite part of every culture. It’s enriching how food brings us together – my closest encounters with Emiratis have always been over a meal, and this has been the most enjoyable so far.

Arwa’s family resides in what I term “old Dubai” – the sprawling villa, complete with central majlis and aviary can be found among other lovely homes in an area that has been well settled well before the boom arrived. Her home is bubbling with life and culture, and yet also pristine and formal. It is filled with articles of texture both soft and hard to the touch, and colours ranging from pale and neutral to bold and glittering. We were all asked to wear Emirati national dress (jalabiya, not abaya), and it seemed that when we entered, all of us assumed Arwa’s own grace and poise (at least until I tripped over the kitchen step and got my shoe sequins tangled in the loose threads of the embroidery of my dress.) 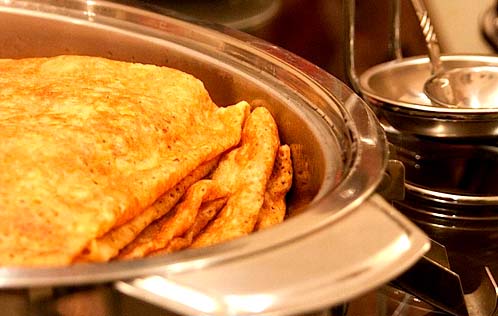 We started with a traditional breakfast – Muhalla with chami – lacy, cardamom flavoured crepes with soft mild white curd – produce from the cows on the family’s farm in Al Awir. Warm chickpeas boiled with chilli (nahee), provided contrast, as did the sticky dried dates, also from the family farm. To tempt us further she provided Batheeth – a sweet date and spice mix shaped with a mammoul mould to form little cakes.

Following a further natter over gahwa (Arabic coffee), we made our way into the kitchen – sized to feed an extended family, or house a group of food bloggers for a cooking lesson. We stood open-mouthed at the fridges and pantry – and I surpressed a desire to go shopping in them. Arwa’s mother giggled while we took photos of her provisions, yet greeted us with kindness and patience.

Dish one was Fogat Diyay – which I understand basically translates as chicken on top. It is a rice dish similar to Al Majboos, loosely related to Biryani. When I get around to it, I will have a pop myself and list the recipe. But in the meantime, lets get to the heart – its all about the spices. 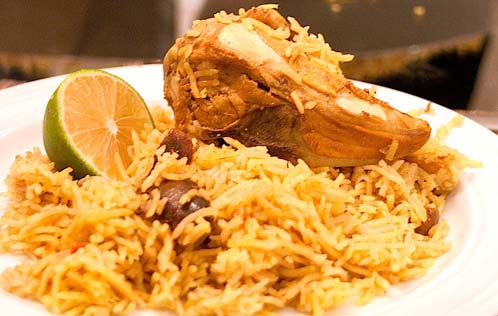 Firstly, there are the basics – whole cardamom, dried limes and chilli, crushed fresh garlic and ginger, and powdered turmeric. Next, you will need bzaar – a ground mix (a little like garam masala) of fragrant spices over a cinnamon base, including possibly nutmeg, black pepper and cardamom amongst other things. Then there is the Emirati Masala – an incredibly aromatic curry powder which can be bought mixed, but in this case would never be. It, like the family bzaar and family incense, are the family’s secret recipes. The ingredients are bought in pod form, and toasted and ground under guard. We were not given the recipe, but Emirati hospitality being as it is, it was insisted we take home a bag and and use it later. 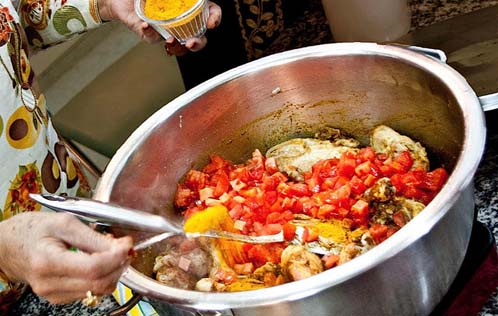 Onions, chicken and spices are fried off, then chopped tomato, cardamom and chillies and water added and the chicken is left to simmer briskly for approximately 20 minutes. Then the chicken is removed and the washed rice added, then placed in a medium-slow oven for about 20 minutes, then the chicken replaced and cooking finished over about another 10. Despite the breakfast we had eaten just an hour or so before, we all indulged in the chicken and lively culinary conversation, with a mix of homemade pickles and salad. The smell of all those spices made me ravenous, and I ate like a woman breaking a fast.

For dessert we ate a traditional breakfast dish, Balaleet. The word is both arabic for “vermicelli” and for the dish itself, which is both sweet and salty, and has added morsels of cardamom and saffron omelet. It’s amazing. (recipe here). This is what is going to school with me for Goldilocks and his classmates.

The day ended with further offers of lessons preparing our native food the traditional way – I’m looking forward to a cous-cous session with Radia of radotouille. Considering my forte is wine and we were in a Muslim home, I offered instead an Australian afternoon around a barbeque, learning the ins and outs of the lamb-chop. I got giggles but no takers.

So it’s a start, but by no means the end of my study of Emirati cooking. If you wish to go further, you might want to follow me into places such as Emirati N More, which unfortunately got a bad review, but I’m going to give them another chance, and Al Fanar, which seems to have escaped mention so far. You might also want to take a look at these pages on Time Out Dubai and Visit Abu Dhabi, which detail some of the essentials of Emirati Cuisine. You might also want to check out some regional websites and blogs such as Anissa Hanou (present at the session), Lgeimat Junkies, and the non-emirati, but keen and experimental Ginger and Scotch. Of course you can also go across and say hello to Arwa, who has a couple of lovely recipes listed around Ramadan time.

Thank you Arwa, and please also thank Ummu for me…