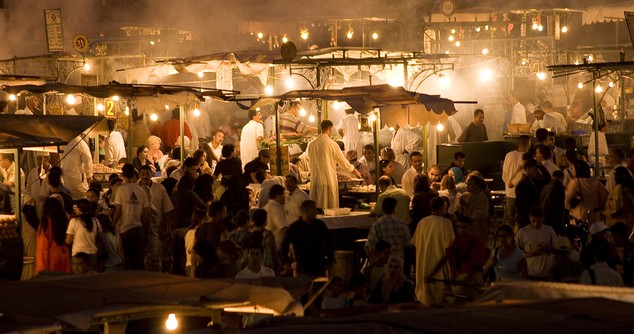 A recent article in an Australian weekend newspaper is a reminder of how enduring cliches about Morocco can be. Moroccan tourism authorities have a vested interest in maintaining an Orientalist view of the country, however, the truth is far richer and may appeal even more to travellers.

If you were a reader of the Sun Herald newspaper in Australia, you could be forgiven for thinking that the only place worth visiting in Morocco is Marrakech. Of its last eighteen travel stories, all were about Marrakech.

A recent list of the “Top Ten Exotic Locations” for 2013 had Morocco at number nine. But what consitutes exotic?

1. of foreign origin or character; not native; introduced from abroad, but not fully naturalized or acclimatized: exotic foods; exotic plants.

2. strikingly unusual or strange in effect or appearance: an exotic hairstyle.

A family of Moroccans from Errachidia, finding themselves in Australia on Sydney’s Bondi Beach would certainly find it exotic. It is also certain they would find the Mardi Gras, Aboriginal cultural performances and countless other Australian attractions extremely exotic. Yet a search through Australian tourism websites shows that the word “exotic” is not a selling point.

“Set in a luxurious private compound, overflowing with whimsical sculptures, on the outskirts of Marrakesh, Harem is not your usual spa retreat. Sure, it evokes Moroccan exotica and, of course, it offers healthy food, foot baths and facials, but it is primarily a place of discovery, of surprise.“

And there is a new “exotic” Morocco – that of the glamours world of the Palmeraie, a twenty minute drive from Marrakech. This high-end destination is getting a lot of media attention because many of the hotel and spa owners can afford to sponsor trips for journalists. But, is it a “Moroccan experience”?

On the plus side is the growth of boutique tourism where small companies arrange holidays and tours that have specific interests at their heart. This is a growing area in Morocco with tours based on music, art and architecture, culinary adventures, design, photography and painting all now available.

Overseas bookings are up 20 per cent on last year. ‘Hawaii and Thailand are completely booked out due to the strength of the Aussie dollar and the recent events in Fiji. And I’ve never seen Bali so busy. – David Goldman of Goldman Travel in Bondi Junction

AdvertisementApart from the strong dollar, he said many high-end travellers were finding better value for money overseas. ”We’re finding that people want a bit of a culture fix,” he said. ”

So, with the exchange rates so good, Australians are travelling more. But when asking a bunch of friends about destinations, they almost all opt for “safe choices”…nothing exotic. Ironically, they are more likely to be mugged in Rome, ripped off in Paris or encounter bomb threats in London than have negative experiences in Morocco.

The fact that Morocco is usually a safe destination and one suitable for solo women travellers is being recognised and there are now dozens of “retreats”, “surf workshops”, “yoga weeks” and “spa holidays” being advertised