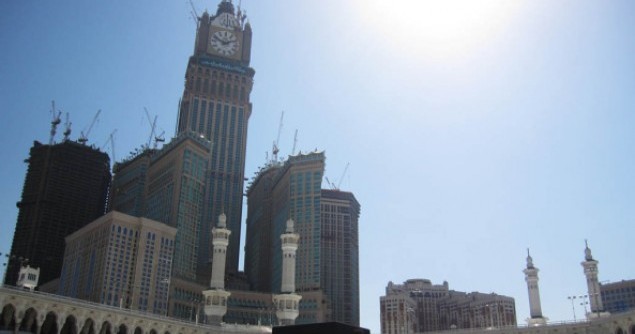 Daniel Varisco’s amusingly satirical article on the Post Ibn ‘Big Ben’ Casts its Shadow over Mecca  has made me wonder why the Saudi clergy, who are responsible for administrating the religious affairs of the kingdom, have chosen to put their weight behind the demolition of certain historical buildings and relics near and dear to the world population of Muslims. From what I can tell about what has been written on the matter, their argument is that it strengthens Islam by eliminating symbols that cause people to worship things other than Allah.

I am no scholar, but it seems to me that if this is true, why didn’t the four righteous Khalifas of Islam designated by the Prophet Muhammad (PBUH) himself as the best of mankind (among the best of mankind before or since), raze the historical sites in question in their time? What also has eluded my layman’s comprehension of the de-construction of these holiest of sites is since prior to the advent of these current opinions no such action was taken, why has this suddenly become the case now?

I haven’t been able  to fathom what could have come up in the 1,400 or so intervening years that makes these demolitions a good call?

I used to think that what makes Islam markly different from its Judeo-Christian ideological counterparts (Christianity and Judaism) are the sites and artifacts which verify the history of the religion. It is one thing to say some Prophet existed—it is quite another to be able to go to where he lived, worked and established his example and message and see the actual physical evidence thereof. Rumor has it that there are plans in the works to pave over the Prophet Mohammad’s (PBUH) grave site  in Madinah for the sake of making room for more pilgrims and the lucrative revenues that comes with them (like for example, the 3 billion dollar luxury hotel and mall complex adjacent the Kaba).

I sincerely hope this is not true. I am still not sure how the present displacement of affordable hotels such as the ones that used to be in walking distance from the Kaba– replaced with the Royal Clock Tower and  the Jabal Omar Complex with its luxury hotels and apartments, corresponds with the spiritual idea of the repenting Hajji humbling seeking Allah’s forgiveness and grace. I still eagerly await  the knowledgeable sources to reveal to me a deeper understanding of how it makes sense Islamically.

It seems to me those who are making these plans to sanitize the landscape of Arabia from the iniquity of the possible physical sources of polytheism could make better use of their time and energy finding out why Saudi youth are losing their ability to understand and speak Arabic (Quran or otherwise) or why many Saudi rugrats prefer to emulate Tom Cruise and Venus Williams rather than Umar Ibn Khattab (RUH) and Ayesha (RAH).  A person of my limited intellectual gifts can’t see how bringing down proof of the existence of what took place during and after the lifetime of the Prophet (PBUH) will stop the cultural and religious erosion taking place in the Arab world without an infidel touching a single brick in the heart of the Islamic world.

Somehow, I think it is a mistake to believe that this has anything to do with old Ottoman forts or people worshiping the graves of the Prophet (PBUH) or his Sahabahs ( companions–RUH).

It seems to me that the idolatry and the mechanisms of secularism the Saudi Government wages an ideological war against don’t generally use the ancient relics of truth but the icons of modernization and sexual exploitation to destroy belief. These issues are more about a better program to teach comprehensive religious ethics and civics than the artifice of some archeological relics.

One Response to ‘Erasing Idolatry’ or ‘Making Way for Five Star Hotels’?