Egypt’s Culinary Treasure: The Delight That Is Feteer 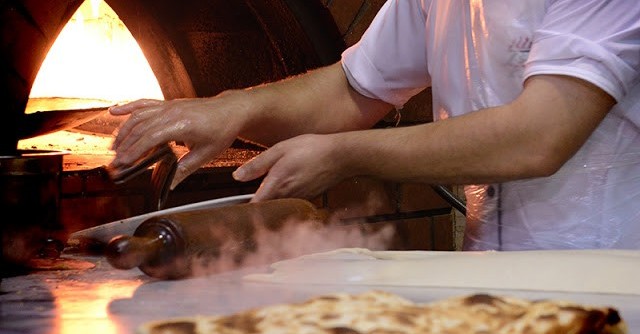 Can somebody tell me why I never tried this in Egypt? Why I had to be introduced to this Egyptian staple by an Indian girl living in Dubai? Granted, she’s no ordinary Indian girl living in Dubai – she’s Arva Ahmed, of Frying Pan Tours, but still. This should be something that Cairo promote as Giza, the Khan el-Khalili Souk or the Coptic Quarter. It’s a national treasure.

I’m talking about Feteer (pronounced, in my Australian accent, as “fuh-teer“), a flaky bubbly cushion of crispy pastry that can be filled with anything from honey to beef and olives. Funnily enough, it always seems to contain Kraft cream cheese. Not the gourmet Philly stuff from the supermarket fridge, but giant tubs of preservative-filled, room-temperature, hyper-processed goo, glistening with unnatural pearlessence. It’s slathered in drippy lardy ladelfuls as a base for every other flavour. To my surprise again, it works a charm.

Helio Lounge, a new Egyptian cafe with an interesting take on the cuisine had me and a couple of other bloggers around for a lesson.

Then the wafer-thin dough is (usually) folded upon itself once or twice, and fillings are smeared across, of course starting with the cream cheese. When filled, it’s folded into an envelope, a little like a calzone would be.

Then it’s popped into a furnace – which again I will liken to pizza production – much like a wood-fired pizza oven. It only takes a few minutes, and it’s out again. Pocked with charcoal-dusted bubbles of air, oozing with delicious white cheese, and absolutely steaming with heat.

It’s not just about the food itself, which is pretty darned good. It’s about the experience. Walking into a joint like Al Amor in Hor al Anz on a Thursday night at about 10pm is a heart-starter in itself.

It’s hot – there are three ovens pumping out the degrees. Supper-hungry patrons queue three-deep and three-wide. The marble is slick and slurried with the water that stops it from sticking, and the dough slaps louder than the beat of a drum. The cooks work quickly – at least one feteer each per minute goes in the oven, just in time to bring one out, and check on the other one that went in a minute ago.

It’s a constant movement – sprinkle, roll, fling, slap, fling, slap, stretch, spread, sprinkle, fold, heave, ho, plop and then finally cut inside the cardboard box. It’s then thrust at you, and you have the arduous task of waiting until the feteer is cool enough to touch – a very long 2-3 minutes.

I’ve linked my treasure map below.