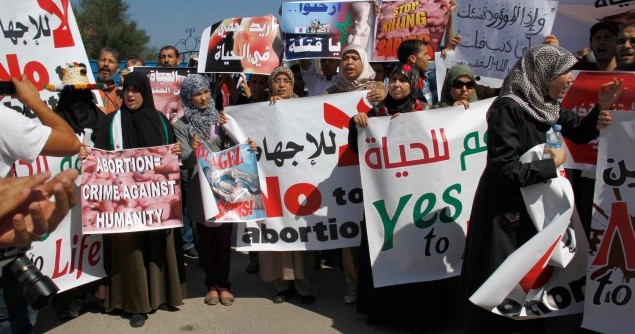 The Moroccan navy has taken action by blocking the  port of Smir 40 kilometres (25 miles) east of Tangier in which a controversial Dutch “abortion ship” that was due to dock on today, in the first such trip to a Muslim country.

Protestors clashed with police and hurled abuse at a Dutch abortion-rights activist.

The protesters, some in conservative Muslim robes and headscarves, carried pictures of bloody embryos and shouted “terrorist” and “assassin” at Rebecca Gomperts in the coastal town of Smir.

Speaking to the AFP news agency by phone from an apartment near the harbour of Smir, Dr Gunilla Kleiverga, a gynaecologist, said, “They have blocked the harbour. We can see a big warship in front of the harbour. We’re making an alternative plan. So we’re asking journalists to come to the harbour at 1300 GMT,” when the ship is due to arrive, she said, without elaborating.

An AFP photographer said police were preventing journalists from reaching the harbour.

Abortion is illegal in Morocco, and the country’s Health Ministry said in a statement on Wednesday that it had not authorized the vessel’s visit or any procedures by nonresident doctors. “The ministry… has never been informed of this event and has not authorised any non-resident party or doctor in Morocco to carry out this medical intervention,” it said.

The abortion ship is run by Women on Waves, which was founded in 1999 by a Dutch doctor to provide abortions to women in countries where the practice is illegal. Their ship takes women into international waters to perform the abortions, which are legal under Dutch law, until 6.5 weeks into the pregnancy.

Kleiverga said that, despite being illegal, around 700 abortion take place in Morocco every day, many of them exposing the women to dangerous and sometimes fatal treatment.

Women on Waves also advocates the use of a drug called misoprostol, which it says is available legally in Morocco, to perform abortions up to 12 weeks after conception. The group says it is establishing a phone hotline in Morocco for women to get information on how to perform the abortions at home.

Ordinary Moroccans voiced strong opposition on Wednesday to the visit, which local youth group the Alternative Movement for Individual Liberties (MALI) has helped to organise.

“Moroccan law forbids abortion. Moroccan religious identity say it is forbidden and so does Islam. So the government cannot allow this ship to come to Morocco,” lawyer Abdelmalik Zaza was quoted as saying in Al-Tajdid, the newspaper of ruling Islamist party the PJD.