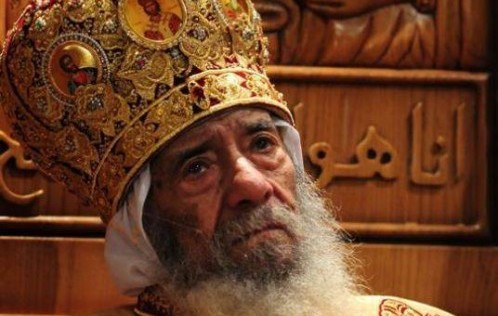 Images of Mohamed Tantawy, chief of the ruling military council in Egypt, meeting with Coptic Pope Shenouda III last week brought back memories of the old regime’s attempts to defuse sectarian tensions through staged meetings which often resulted in nothing. Yet, this most recent meeting comes at a very critical moment in Egypt’s modern history and could be a great step in the right direction.

The Tantawy-Shenouda meeting was an attempt to contain the crisis following the violent confrontation between the armed forces and thousands of Coptic protesters who were marching for their rights in front of the state television building on 9 October. The clash left 27 protesters dead and hundreds more injured in the most violent attack on Copts in years.

Tantawy and Shenouda’s meeting resulted in both parties agreeing to resolve key concerns of the Coptic community, primarily the right to build new churches and obtain licenses for those that currently operate without one, an issue that has caused much tension in recent months. Church officials said the former regime allowed some churches to practice without licenses, to get out of issuing them, but this left them operating without proper documentation and vulnerable to extremists.

The 9 October demonstrations were sparked when a group of ultra-conservative Muslims attacked an unlicensed Coptic church in the town of Edfu in southern Egypt, setting part of it ablaze. Copts around the country were angered by the attack and the lack of appropriate response from the state, and took to the streets en masse, resulting in clashes with the military.

At the meeting, the military council promised Shenouda that it would pass a law dealing comprehensively with the issue of church construction and would issue licenses to those churches currently operating without them. This course of action could have a significant positive impact on the Coptic community, which has been wounded by the recent violence.

Dialogue between the church and the state is vital for the nation’s stability. It also sends a message to Coptic Egyptians, emphasising their role as an intrinsic part of the nation. And it reassures Copts that the state is willing to take measures ensuring that violence against their community will not reoccur.

Even following the meeting, a majority of Copts still hold the military ruling council responsible for the killing of the 27 protesters and see it as an extension of the former regime, which neglected Coptic issues and further marginalised their community by not providing much-needed security in times of tension, as evidenced by several attacks against Copts, including the Saints Church bomb on New Year’s Day in Alexandria which left 21 dead. At the time Copts accused the government of not providing enough security to protect the church.

The military’s official story regarding the 9 October clashes also conflicts with protesters’ stories maintaining that Coptic protesters initiated the attack and that the armed forces were merely defending themselves. Online videos posted by activists shortly after the attack, however, showed soldiers opening fire at people, running them over with armoured vehicles and even vandalising cars.

The ruling council has issued a new draft law following the attacks, which criminalises discrimination in all forms, including religious. But the real solution – to bridge the gap between Copts and the state, and between Copts and Muslims – is in the hands of the people.

Starting at a grassroots level, rebuilding trust between the two major religious groups is key, bypassing conversations that are framed as “us” against “them”. It is vital to generate a shared understanding that the entire country stands to suffer from interreligious violence, which only leads to further instability. Copts also need stronger participation in state affairs and should surrender their suspicions, instead taking the council at its word when it says – as it has on numerous occasions – that Copts are part of the Egyptian fabric and should not be marginalised.

Because of the anger and resentment emanating from the 9 October attacks, a growing movement within the Coptic community is calling for a boycott of the upcoming elections. But to not take part in Egypt’s first free election after 30 years of fraud and misrepresentation would be a grave mistake and a missed opportunity to make history as an engaged part of Egyptian citizenry.

The rebuilding of the Edfu Church could heal some wounds, but it would be largely symbolic, masking the real roots of the violence. Closing the growing gap between Copts and the state with communication and goodwill will be of utmost importance. After all that they have been through lately, Egyptians understand they are all the same when it comes to poverty, social justice and lack of opportunity. And so they must realise that they need to work together and let go of negative misperceptions in order to create positive change and successfully share their land for thousands of years to come.

Manar Ammar is a Cairo-based freelance journalist and a staff writer with Bikya Masr (www.bikyamasr.com)