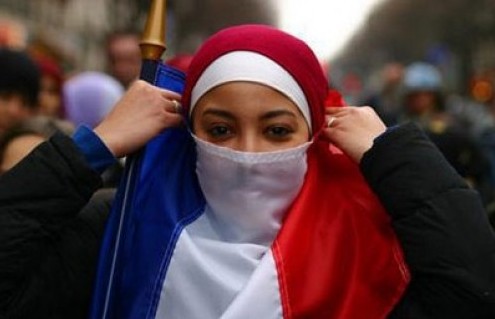 The Washington Post runs an acerbic piece taken from Muslimah.com, a website for and by Muslim women. In it, the author notes that the French and Belgian police [and now, apparently, the Italians as well] are in over their heads when it comes to enforcing the laws against wearing face coverings in public. She suggests they take lessons from the Saudi Commission for the Promotion of Virtue and Prevention of Vice and, if necessary, the Iranian Religious Guidance Patrols. These groups, she says, have long practice in oppressing women. They know how to do it with panache and not a drop of embarrassment!

What the Saudi morality police can teach the French
Uzma Mariam Ahmed — Contributor to AltMuslimah.com

Since the enforcement of France and Belgium’s bans on face veils (“niqab”), the countries’ policemen have been assigned a singularly difficult task: making sure that Muslim women behave. Police are required to detain and fine Muslim women covering their faces illegally in public. The French police send some of these women to citizenship classes where they can learn the appropriate way to exhibit their spirits of liberté and égalité, while in Belgium offenders can also be jailed (sans face veils, of course). As French President Sarkozy stated when promoting the ban, the niqab is “a sign of subservience, a sign of debasement” of women. Recent news articles indicate that, at least in France, the police force is befuddled about how to enforce this ban and ensure that Muslim women are less subservient and debased.

Should they approach the veiled Saudi princesses shopping at Louis Vuitton with their security guards? Since that could lead to all kinds of trouble, not to mention antagonize the many Arabian princesses who are lovers of French fashion, perhaps they should instead focus on chasing after veiled housewives in minivans shuttling children to afterschool activities? How should the police handle those rebellious women living in the Muslim ghettos of Paris who cover their faces, particularly if they are carrying about in large numbers? Even more puzzling, how do the police determine if the women are donning the niqab by choice or have been coerced into veiling their faces by their husbands, brothers, or fathers?

One Response to Consultancy Opportunity for Saudi Mutawa