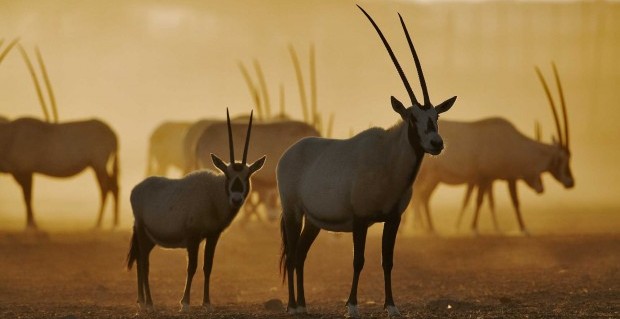 Did you know that Saudi Arabia is home to gazelles?  I know, a gazelle is not the first creature that comes to mind when thinking about Saudi Arabia.  The gazelle is actually the Arabian oryx.

The Arabian oryx , also referred to as a white antelope, roamed throughout  most of the Arabian peninsula until it was hunted to extinction in the 1970’s.

The Saudi Arabia Oryx conservation and restoration programme was started in 1986 by the National Wildlife Research Center (NWRC) under the Saudi Wildlife Commission (SWC), formerly National Commission for Wildlife Conservation and Development (NCWCD).  Captive breeding of Oryx at the NWRC in Taif have enabled the restoration of the species in the Kingdom: a first reintroduction took place in the fenced Mahazat as-Sayd Protected Area in 1990 and in 1995 the second free-ranging population of Oryx in the world was established in the unfenced ‘Uruq Bani Ma’arid in the “Empty Quarter”.  The Uruq Bani Ma’arid protected area was the only place where a free-ranging oryx population existed until 2006.  The Mahazat as-Sayd protected area has more than 500 oryx.  A management plan has been drafted to manage the population of Arabian oryx so as not to exceed the carrying capacity of the protected area.

Re-introduction programmes of the Arabian Oryx were selected from populations which were identical to the same species which had been exterminated.  Founders were obtained from areas where the environment is as harsh as the introduction sites.  Released animals were marked with suitable tags for identification and fitted with radio collars to enable them to be relocated after release.

A friend of mine, renown Saudi photographer, Mohammed Babelli, has one of the most magnificent photos I’d ever seen of the Arabian Oryx in the Rub al Khali (Empty Quarter).  He came across a full herd which was galloping down a sand dune.  His photos were so extraordinary that they were framed and presented as a gift to King Abdullah.  I’m confident that Babelli’s photos are among the best ever taken of the Arabian Oryx in the wild.