Climate Change: The Arab World Has ‘Finally Got It’ 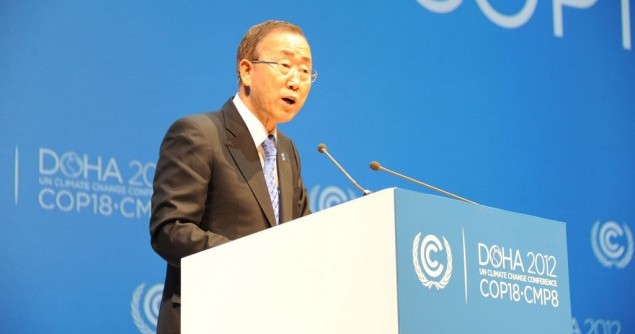 The normally frenetic pace of Doha’s construction sites slowed earlier this month as workers stopped and stared at something that had never been seen in the State of Qatar before. Almost 1000 people marching down Doha’s Corniche, waving signs and chanting. It was a public demonstration calling for Arab countries to take the lead on climate change. It was a very powerful first, and construction managers can rest assured, it will not be the last.

The legacy of the Middle East’s first climate talks, the UN Climate Change Conference hosted in Doha between 26 November and 8 December 2012, will not be the pages of text agreed to by countries late in the day on 8 December, but the fundamental shift in the region’s consciousness on the issue of climate change. The most important element of holding the UN climate negotiations in Qatar was bringing the climate change debate into the heart of the region.

Achieving a shift in the thinking around climate change is no easy task in a region like the Gulf where fossil fuels are responsible for 73 per cent of gross domestic product and fuel subsidies are seen as an entitlement. In fact, one of the defining images of the passing of the Kyoto Protocol in 1997 was the Saudi delegation vehemently protesting the protocol.

But the nascent Arab civil society movement which includes the Arab Youth Climate Movement, founded last September, has already achieved some successes. Arab civil society delegates made their presence felt in the halls of the Qatari National Convention Centre calling for regional leadership. And though the Doha talks failed to deliver increased cuts to carbon pollution or provide any credible pathway to $100 billion per year in finances by 2020 to help the poorest countries deal with climate change, in the later stages of the negotiations four GCC countries – Bahrain, Saudi Arabia, Qatar and the United Arab Emirates – quietly issued a plan to announce emissions reduction actions in 2013.

While a “pledge to pledge” is not enough to be considered true climate action, the difference between this response, and the image of Saudi Arabia rejecting the Kyoto Protocol, is stark. This foray into a world where low carbon development is an economic and environmental necessity is significant.

Action from another regional player, Lebanon, was more forthcoming. At the talks, Beirut announced a voluntary renewable energy target of 12 per cent by 2020. This ray of hope coming from the region could not be timelier.

What is important now is to ensure that the debate on climate change continues in the region, as strongly as in the few weeks before this conference.

That is why Arab civil society strongly welcomed Qatar’s establishment of two new institutions, the Climate Research Institute and an annual Forum on Climate Change. These institutions will ensure that the region continues to engage in the global climate debate, and keep it one of the priorities on the political agenda.

Just prior to the start of the Doha negotiations, credible reports were published by an array of well-respected scientists, economists and climate change experts, all with essentially the same conclusion – we are currently on an unsustainable path which suggests the world will be faced with catastrophic effects from climate change and eventually the collapse of human civilisation.

Two weeks of negotiations in Doha did not alter that path. But a shift from politics to working for the people, and our future, would.

Wael Hmaidan is the director of Climate Action Network International, a network of over 700 Non-Governmental Organisations (NGOs) in more than 90 countries working to promote government and individual action to limit human-induced climate change to ecologically sustainable levels

2 Responses to Climate Change: The Arab World Has ‘Finally Got It’