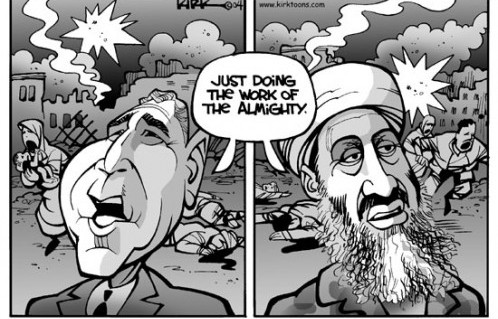 O’Reilly, who has engaged in hate speech toward Muslims of the sort that inspired Breivik’s violence, is in part trying to change the discussion so that his guilt in fostering an atmosphere of rancor is not brought up. The in-your-face pundit has insisted that “Muslims killed us on 9/11,” the kind of ‘shouting fire in a theater” discourse that could easily get people killed.

In fact, O’Reilly is a specialist in bullying, violent rhetoric. He wished that the Katrina hurricane hit the United Nations building and he “wouldn’t have rescued them,” a tasteless and callous way to refer to the deaths of over 4,000 persons in New Orleans and a transposition of that tragedy to New York city. Ironically, the UN building was one of five New York landmarks that al-Qaeda wanted to blow up. I’m not sure it is really a Christian sentiment that O’Reilly gives us here.

As for O’Reilly’s comments on the Norway massacre, Breivik is a “cultural Christian,” believing in a monocultural Christian Europe, and said he wants Protestants to return to the fold of Catholicism so as to present a united front. He also had a cult of the Knights Templar. I mean, it is not as if he is a Buddhist.

Ironically, Breivik’s form of Christianity is precisely like the “Islam” of many Muslim fundamentalists, who are only nominal Muslims but see the religion as a bulwark against Western dominance. Many of the al-Qaeda figures were not particularly pious. Thus, September 11 hijacker Ziad Jarrah was from a secular Sunni family (an uncle was a Baathist) and he had a live-in Turkish girlfriend, and danced at a wedding not long before his horrible mass murder spree.

Since O’Reilly insists that Jarrah was a Muslim, we’d have on the same grounds to insist that Breivik is a Christian.

It is darkly humorous to see O’Reilly annoyed at Christianity being tarred with the brush of Breivik; now he knows what it was like for Muslims who had nothing to do with al-Qaeda (i.e. almost all of them) to suddenly fall under a cloud because of the actions of a small number of militants.

What of the argument that whereas a true Christian could never murder because the New Testament forbids it, the Qur’an commands holy war against infidels?

It is not actually clear that the New Testament is a pacifist document. Jesus says he brings a “sword.” Peter cut off the ear of the servant of the High Priest who came to arrest his master; you can’t cut off someone’s ear with a broadsword unless you were trying to kill him. [Update: Christian pacifists see Jesus’ statement as metaphorical and point to his rebuke of Peter. But we cannot know that the statement was metaphorical, and the rebuke may have been tactical rather than about principle; Peter certainly hadn’t imbibed pacifist principles as of that point. In the context of the [pdf] Jewish messianic movements of late antiquity, pacifism is a little unlikely. Ideas of ethical non-retaliation by individuals also existed in rabbinical Judaism, but did not rule out war by states.) And it was certainly Christian authorities who called for, e.g., the Crusades.

But it is equally important to stress that the Qur’an forbids murder. The command to fight in the Qur’an is against militant polytheists of Mecca who were trying to wipe out the Muslims– i.e. it is about self-defense. Islamic law forbids terrorizing people or depriving people of life and property when they have done nothing wrong. Christians and Jews in traditional Muslim society were under the law guaranteed the right to life and property, though of course in the real world sometimes there were pogroms (just as Christians conducted pogroms against Muslims and Jews despite the fine words in the New Testament). Classical Muslim law forbids individual laypersons just to declare jihad one morning; it has to be declared by duly constituted Muslim authorities. Today’s Muslim terrorists are not authorized by any major Muslim religious authority, and have been condemned by all the ones that count. O’Reilly’s insinuation that a “state” backs Muslim terrorism reminds us of his confident predictions that it would be revealed that Iraqi resources flowed into the 9/11 operation (they did not).

So the “jihadis” are no more exemplars of believing Islam than Breivik is of believing Christianity. O’Reilly delivered himself of a self-loving and bigotted diatribe typical of the main themes of Muslim-hating in America, a discourse that is attended with inherent dangers of violence.

As for whether believing Christians can be terrorists, of course they can. The Crusades often involved terrorism (the use of violence against innocent civilians by non-state actors for political purposes). They don’t call it the Wars of Religion in France for nothing (they are why France is not today a largely Protestant country). There were some believing priests in the IRA (again, they may have had legitimate grievances, but killing innocents is not OK). More recently we have the example of the murders of physicians who perform surgery to terminate pregnancies. ( O’Reilly’s campaign of vilification against one such physician, it is alleged, may not have been irrelevant to his murder). Or post-colonial movements like the Lord’s Resistance Army.

O’Reilly is just engaged in special pleading. He is embarrassed at how much like his own diatribes parts of Anders Breivik’s Manifesto sound. Ironically, he uses exactly the same arguments about the transcendental virtue of Christianity that Muslim fundamentalists use about Islam.

O’Reilly, that self-proclaimed exemplar of Christianity, has ambushed guests and whipped up bigotry and sexually harassed co-workers (remember the loofah? Or was it a felafel?). That he is a major voice on American television tells you how weird the media environment is in the US. Imagine what it was like for Norwegians to hear that Glenn Beck had compared the innocent children shot down by Breivik to Hitler Youth. And now they will hear from O’Reilly that Breivik was a) not a Christian and b) that Breivik’s views on Islam and Muslims were correct. American “news” is being Breivikized before our eyes.