Assad, the Arab League and More Death in Syria 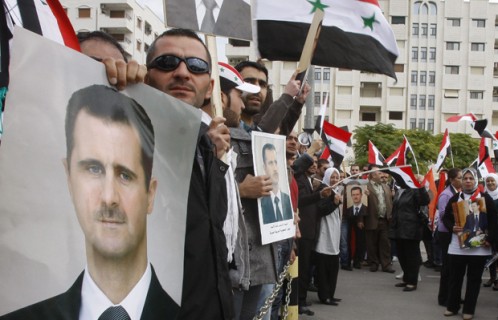 A day after an Arab League monitor quit Syria in disgust, another one is apparently threatening to resign. Yesterday, Anwar Malek left the mission in Syria, appearing on Al Jazeera English to call it a ‘farce’. The Algerian (although some sources call him Tunisian) said:

“What I saw was a humanitarian disaster. The regime is not just committing one war crime, but a series of crimes against its people. The snipers are everywhere, shooting at civilians. People are being kidnapped. Prisoners are being tortured and none were released.”

The Arab League, though, seriously undermined this man’s statements, saying he hadn’t even been out on the streets.

He was ill and bedridden at his Syria hotel. So how could he make those claims?

Another monitor has apparently threatened to quit today, although he has chosen to remain anonymous and the claims remain impossible to verify.

The Syrian authorities have exploited the weakness in the performance of the delegation to not respond. There is no real response on the ground.

The military gear is still present even in the mosques. We asked that military equipment be withdrawn from the Abu Bakr al-Siddiq mosque in Deraa and until today they have not withdrawn.

Bashar, wasn’t fazed. In fact, he seems positively glowing. The Arab League mission is in disarray, they can’t even agree among themselves. Unannounced, he made his first public appearance since the start of the violence 10 months ago.

The interesting thing about his speech was not the content – for there was nothing new – but the fact that Bashar’s wife and kids appeared alongside him. There have been many rumours that British-born Asma Al-Assad may have fled to her home in London. Also, note the weird people in puffer jackets in the colours of the Syrian flag.

Before the party in Damascus had even ended, there was tragic news from Homs. Two groups of international journalists were taken up there, when there was a mortar and RPG attack on a pro-government crowd. Some of the journalists ran over to see what was happening, and celebrated French documentary maker Gilles Jacquier was killed. 8 Syrians also died in the attack.

Ian Black, who was in the other group sums it up with his headline: ‘If the regime wanted to prove Homs was safe, it failed’.

Joseph Eid, a photographer with the AFP news agency, said the attack had come without warning. “We were expecting there to be violence, yes, but we never expected there to be an attack. They had warned us that the two districts attack each other in the evening, they said that after three o’clock in the afternoon it’s dangerous, we were there at three, and it started, it kicked off.”

I condemn the incident in Homs today which caused the death of at least eight civilians including a French journalist, Gilles Jacquier. These deaths highlight once again the terrible price being paid by the people of Homs, as well as the courage of journalists who take great personal risks to bring to light what is happening to the people of Syria.

The who-committed-a-senseless-act-of-violence debate after every Syria attack is the Middle East’s version of a Rorschach test.

He was referring to the ink blot test: look at the pattern and tell us what you see. What you see reveals something about your inner character. And in the same way, how you interpret the latest massacre tells us who you support in this deadly race to the bottom.

The French ambassador is now accompanying Jacquier’s body from Homs back to Damascus. There’s no international official to accompany the bodies of the eight nameless civilians who were killed alongside him.