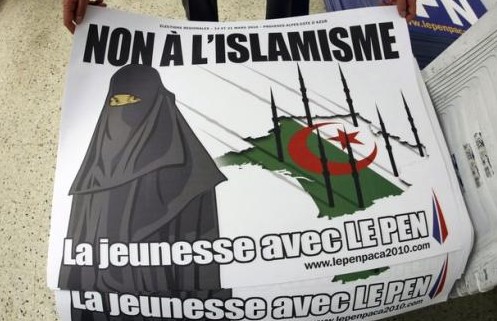 France has gone all burqa-phobic again. As of Monday, it will be illegal in France for anyone to cover their face in public. The ban has been on the horizon for some time, so nothing much new here, but the wider context has intensified.

The leader of the far-right Front National, Marine le Pen, is campaigning hard against Muslims and immigration, and her popularity is increasing. She has compared crowds of Muslims praying in the streets outside mosques to the Nazi occupation.

Not to be outdone, the president, Nicolas Sarkozy, this week organised a debate on secularism and the role of religion. His prime minister, François Fillon, refused to attend, saying that it would further stigmatise Muslims. Abderrahmane Dahmane, who was fired from his post as Sarkozy’s adviser on integration for criticising the debate, called on Muslims to wear a green star in protest against the discussion. It is aimed to echo the yellow star that Jews in Europe were forced to wear during the Nazi era.

With such emotive references on both sides to the Nazi era, it’s clear that France still needs to come to terms with its own history in dealing with minorities.

Despite arguing that the ban and the debate are in defence of secularism, Sarkozy has had no qualms in simultaneously praising the “Christian heritage” of the country.

And even though a 1905 law separated church and state, churches and synagogues still receive indirect subsidies from the state. If mosques were included in this it might help put an end to the lack of space in them that forces worshippers to overflow onto the streets.

It is easy to understand the motivation behind the ill-conceived debate on secularism held this week, as it is the political context for the ban on face veils in public.

However, this would fail to illuminate the bigger picture. By pandering to the far-right to gain votes, Sarkozy is giving anti-Muslim sentiment legitimacy and a national platform that it does not deserve and that could have long-term and dangerous consequences.

He is not the only leader guilty of this. Germany’s Angela Merkel was keen to score cheap political points last year when she stated that the “multikulti” project had failed, and pointed her finger at Muslims. Merkel would do well to remember that Germany’s earlier mono-culture project in the 1930s and 1940s did not work out so well.

Following hot on her heels was the UK’s prime minister, who repeated the same vacuous mantra in February this year at a conference in Munich.

He told world leaders that state multiculturalism had failed in the UK and pledged to cut funding for Muslim groups that failed to respect basic British values such as freedom of speech and democracy. Strange words from a government that harped on about “stability” when the protesters of Tahrir Square were demonstrating for democracy.

Europe must be more principled in its approach to dealing with its Muslim populations. Countries such as the UK and France are taking bold actions in Libya to support the movement towards freedom and democracy. At the same time, domestically they wish to suppress Muslim self-expression.

You can’t have it both ways. Freedom, self-expression and democracy need to be accompanied by one more value to be meaningful: a consistent standard for all.

One Response to Anti-Islam Sentiment Fuelled by European Leaders