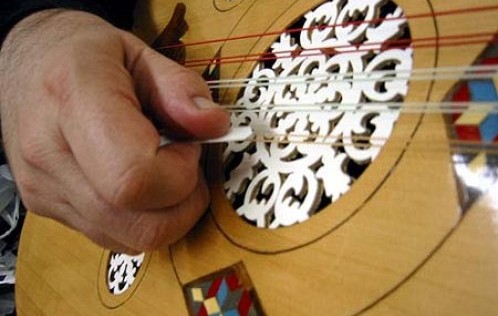 There have been heated discussions on this blog on whether music and musical instruments is haram (forbidden) in the Muslim faith.  Saudi Arabia is among the most conservative of Muslim countries.

However, Al Farabi is making a splash in the Kingdom bringing new sounds of music to the Kingdom through a special combination of instruments which are fused together with a genuine Arabic voice.  The essence of their music and sound is Arabic poetry which is popular among Saudi Arabia’s youth.

The Saudi audience of Al Farabi consists of individuals who love music and have been waiting to hear a new sound that speaks to their souls, hearts and emotions.  Additionally, Al Farabi has taken the initiative to launch music workshops.

One of Al Farabi’s most popular songs is Al Mothanna – The Story of a King. The idea for the song came from Al-Mothanna, who is a fan of King Faisal and thought of what lyrics should be chosen to represent his character best throughout a song. Al-Mothanna’s knowledge of Arabian poetry helped him choose some lines of Al-Mutanabi’s poems, one of the most famous poets in the history of Arabs.

Later on, a basic musical structure of classic and electric guitars was added alongside a bass guitar and a basic beat by Al-Mothanna and Diya, and the first demo had become a reality. After forming Al Farabi, different instruments were added, such as oud (a form of lute) and piano, and performed live at TEDx Arabia in Jeddah and in the royal residence palace and congress hall in Salzburg, Austria.