A Step Back in Time To The Wonder That Is Hatta 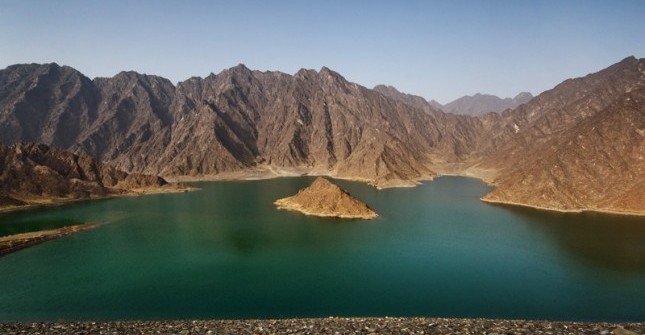 We spent the weekend at the sublime Hatta Fort Hotel because we’ve been married 22 years and both of us needed to get away to overcome the feeling of utter shock.

The Ramoul Bar at the hotel is one of my favourite places on earth. Seriously. It has many fond memories dating back two decades and more – and it’s one of the most wilfully retro experiences to be had in the UAE. Built in 1981, the bar is sheer ’70s wonderfulness, all dark brown velour walls, a walnut ceiling dotted with the original spotlights, square glass lights and brown silkscreen prints on the wall. It’s glorious.

The original furnishings and leather bar edging were cream, they’re red now and the Millbank speakers on the wall have been replaced by Bose units, but much of the original bar is as it was the day the hotel opened up in those faraway hills. It suits a Martini as well as anywhere suits a Martini. Lemon twist, no olive, thanks.

The Hatta Fort still does silver service. It’s wonderful – food is revealed from beneath silver covers, caesar salads and crepes are made at your table. It doesn’t get much better. The hotel runs like clockwork, it knows who it is. Its staff actually want to help. It has beautiful grounds, makes a brilliant breakfast and is more chilled out than a quantum hyper-chiller.

We took a turn up the Hatta track – as was. It was raining when we got up for breakfast, a fine, soft drizzle and a yellow cast to the sky, the mountains slowly enveloped in the encroaching mist. Breakfast looking out over Hatta watching the mountains fold into the meringue, then we set off.

There are few things finer than cool summer rain in the mountains.

Oh, my dears. Who remembers the Great Hatta Track? We first travelled it together, Sarah and I, the week we met during GITEX 1988 – 25 years ago. We hired a Corolla with a colleague of mine and Sarah’s housemate and we took it out to find the Hatta Pools. We overshot. Four wheel drives passed us, staring. The girls got out and pushed at one point as the Corolla’s little engine heaved to negotiate the rutted, vertiginous passes.

We stopped at the village of Rayy (now spelled Rai for some reason) and asked directions at the mosque. It was a Friday. A wasp got into the car, cue the exit of two girls wearing shorts. Legs up to their bums. It’s the only time I’ve ever felt intimidated in the Middle East, in the middle of nowhere, more callow than Callum the Callow Marshmallow and the locals furious at two prancing half-naked beauties decorating their Friday devotions. We beat a hasty retreat and ended up in the wadi at Shuwayah, playing with frogs in the glittering wadi waters that wove through the hot rocks.

In a Corolla. We did it in a Corolla. The hire company was furious at the state of what was eventually returned to it. But what to do?

It’s just a memory, now, that track. It’s blacktop nearly all the way, the only exception one short section where the road has to cross a particularly fearsome stretch of wadi that spates with road-destroying force. They’ve blown up the mountains to make the passes (three of them) more passable, so they don’t climb as steep or high. The biggest was a first-gear climb, especially when the track got rutted up and you were traversing as well as climbing. The swoops down into wadi beds with their stomach-churning bottoming outs have all gone. It’s just, well, a road through the mountains.

But they are still glorious, arid, scalloped mountains that surge from the land with all of the enormous splendour of their volcanic uplifting from what was then the ocean bed. They fold and thrust, patinated by purple outcrops, ochre faces and grey-white striations. Shuwaya is a memory of a wadi pool now, drained by snaking black plastic piping – and the Oleander Waterfall is clearly no longer visited – the old track as it originally was, washed away and accessible only to the brave who knew it was home to a little waterfall and a welcoming campsite on the high ground above the temperamental wadi bed.

The rain petered out, the heat intensifying as we drove down onto the plain, still blacktop all the way where it had once been gatch track, a road through the Madam plain and then up into the mountains past the Omani check-point and then back up to Madam through Vilayat Madha.

I felt intensely sad at the passing of those tracks. But that, I am sure the architect of the new roads would tell us, is progress.