A Muslim Mother’s Dilemma: To Walk At Post-Bomb Event 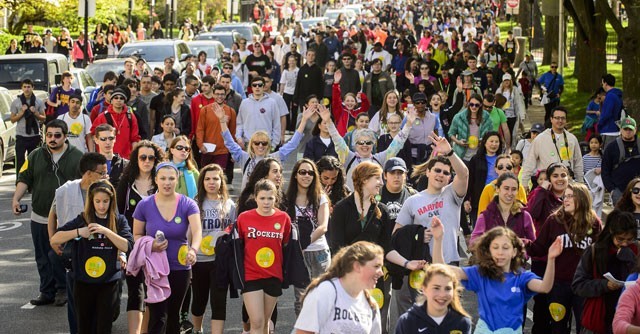 When 30,000 people participated in Project Bread’s walk to eradicate hunger in Boston on 5 May, there was a group among them that was energised but cautious. Just three weeks after the tragedy at the Boston Marathon, members of Muslims Against Hunger were receiving calls from worried family members urging them not to participate due to fear of backlash.

Project Bread runs community-based meal programs and school nutrition initiatives that assist the hungry in Massachusetts. At their 45th Walk for Hunger this year, the organisation raised around $3 million. It was perfectly in sync with the objectives of Muslims Against Hunger, a grassroots organisation with volunteers in 20 cities that aims to mobilise the community to tackle hunger, poverty and homelessness. Approximately 150 Muslim participants raised over $5,000 for Project Bread.

A young mother of three children, Shazia Tariq from Westborough, Massachusetts was one of the Muslims walking for the cause. She had learned about Muslims Against Hunger through the soup kitchens that they regularly organise. An avid athlete, she had registered for the Project Bread Walk in March and had been training for the gruelling 20 mile trek. But after the horrific attacks on 15 April, her family, like that of many others, was worried that because she wears a headscarf she would be easily identifiable as a Muslim and cautioned she should sit this one out.

“The cause is very close to my heart,” Tariq said. “First as Muslims we believe that feeding our neighbours and feeding the hungry is a crucial part of our faith. Second, as a mother I am always telling my children how blessed they are to have a pantry full of food and this was my chance to put my words into action.” She found the resolve to participate and received her family’s blessing despite their initial anxieties.

After the Boston tragedy, a representative from the Council on American-Islamic Relations (CAIR) came to speak to the Muslim community at the Worcester Islamic Center, where Tariq volunteers regularly. After the presentation on civil rights and tips on how to prevent and report backlash, she approached the CAIR Representative, Todd Gallinger, and asked him for his opinion. He reinforced her decision to carry on, calling it the perfect opportunity to dispel stereotypes about Muslim Americans.

“I had already made up my mind,” Tariq said. “But when Mr. Gallinger said that this is the perfect time to engage in interfaith activities and showcase all the positive contributions of Muslim Americans, it just solidified my intention. I would not be at peace by not going, especially since I was not afraid, it was just my loved ones that were worried for me.”

As she walked and ran the 20 miles with friends from the mosque, Tariq was cautious not to attract attention in any way. When she saw an exhausted eight-year old girl sitting on the sidelines, she felt like helping her over the finish line. But her gut instinct said that this was not the right time or place to be over-friendly as a stranger to the child. Instead Tariq brought the little girl oranges and shared a few words of encouragement. She was pleased to see the girl complete the walk a few feet ahead of her.

Tariq had originally wanted to participate in the Boston Marathon but was dealing with asthma during training season. She had planned to at least go and watch the marathon but was sick in bed on that sad day. As an athlete and a Bostonian, she felt she would be getting the best of both worlds by making the iconic Boston Marathon her first ever full marathon.

The Project Bread walk experience has motivated her to train for the Boston Marathon next year. She believes that when it comes to her personal goals, or encouraging her children in sports or academics, its important to push them, and herself, to achieve more. She feels there is a need to cultivate this enthusiasm in community service as well. When her kids were little, she felt they were keeping her back from volunteering in the community. But now she feels she has to do it for the kids because it can have a much bigger impact on their lives when they see her working for a cause rather than just lecturing them about it.

“When a couple in their 70’s can walk hand in hand and an eight-year old can cross the finish line, so can I,” Tariq said. “As Muslims, more of us need to get out of our bubble and directly help the needy, and I plan to continue going the extra mile for it.”

Kiran Ansari is a writer for publications including the Chicago Tribune, Daily Herald, Halal Consumer and Azizah Magazine. She lives with her husband and two children in the suburbs of Chicago.