How To Be Human: What Surgeons Teach Us 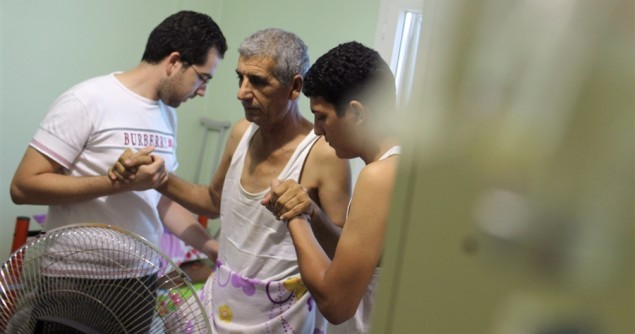 Two weeks ago, international newspaper headlines covered injured Syrians being transported to Israeli hospitals for treatment. This news reminded me of the important role medicine has played in helping me to get to know the “other,” despite a host of factors affecting relations between Israelis and Palestinians.

Thirty-five years ago, I listened to my Palestinian aunt’s family express their deep appreciation for the medical staff at the Hadassah Ein Karem Hospital in the predominantly Jewish neighbourhood of West Jerusalem. They saved the life of their child, Asad, after open-heart surgery performed by Israeli surgeons.

I witnessed this same humanity and professionalism seven years later, when my cousin Bassem had open-heart surgery at the same hospital. The staff – doctors and nurses alike – were kind. A Jewish doctor and a nurse spoke to me compassionately and encouragingly about Bassem’s case, asking for God’s help.

Despite the fact that the Arab-Israeli conflict is omnipresent in our thoughts, I appreciated the hospital’s unparalleled humanitarian approach.

In return, I wished the Jewish patients a quick recovery. I watched the families of Palestinian and Jewish patients alike, sharing hope that their loved ones would be healed. Though sometimes limited by a language barrier, we shared feelings of compassion that could easily be sensed. One does not feel that a patient is Arab or Israeli, but a human being who deserves the care afforded to him or her.

This was one in only a handful of experiences meeting Israeli Jews. Once I met a number of soldiers who came to apprehend my cousin. Another time I worked with a Jewish trader of Iraqi origin who bought our grapes and sold them in a kiosk at the farmer’s market of Mahane Yehuda in Jerusalem. He spoke Arabic well.

But I never imagined I would one day meet Israeli Jews in the hospital, as they carefully treated my cousin, whose brother spent four years in an Israeli prison. These experiences sowed seeds of awareness for me that there can be channels of reconciliation and cooperation between Palestinians and Israelis.

In addition to my few visits to Israeli hospitals, I’ve heard other stories from Palestinians about the compassionate treatment of Arabs at Israeli hospitals which revolved around equality and professionalism.

My cousin’s stories about the Israeli patients he met while visiting his brother during the 1990s in Hadassah Ein Karem Hospital, for example, indicated a sense of solidarity among Israeli and Palestinian patients and their families.

Perhaps it is difficult to read what goes on inside the hearts of Israelis, but with each new visit to see my cousin, a sense of respect between patients and staff in the hospital grew. Israelis, in general, know Arabs because they meet them in Israel where there are many Arab Israelis, but here in the hospital, the potential for friendship, cooperation and interaction with West Bank Palestinians felt greater.

Three years ago, I met an Israeli woman at a beach in Haifa whose child had Down syndrome. At the beginning, I approached them and played with the child. He responded happily, and his mother was pleased. We talked about his birth, how difficult it is to raise him, and how she has someone who helps her. We talked about our common concerns and interests. Her biggest concern was her child, and my interest in him closed the gap between us. Such things can bring us together.

With every important surgery carried out in Israeli hospitals comes the opportunity for compassion and human connections. I hope that these opportunities found in “peace medicine” can also be found outside hospitals. Such interactions can be the key to solving this conflict, and all causes of hatred and conflict.

Tahseen Yaqeen is a writer and a critic from Ramallah.