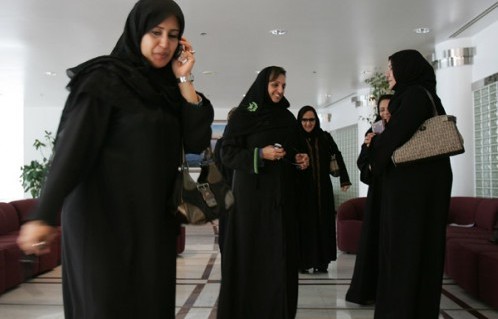 A lesson for politicians, American as well as Saudis: Leadership is not figuring out which way the winds of public opinion are blowing and then going in that direction. Instead, it is figuring out which is the right direction and then going there, even if it sometimes means beating against the wind. This is not a lesson being heeded in Saudi Arabia as it approaches its second cycle of Municipal Council elections. Saudi Gazette/Okaz report that a polling firm has determined that 59% of those polled think it improper for women to take part in political activity.

The most ingenious of the excuses reasons stated is that it “impedes women’s fundamental tasks in the home and in raising children”. While I’m generally easy going, this bit of thinking really torques me. I take it as a given that women are equal to men; obviously, that’s not the case with these critics of women’s voting. Or, perhaps, they just see women as single-dimensional, unable to do many things simultaneously in their lives. Are men incapable of voting if they’re busy with their lives’ work?

Maybe the Saudi ‘spinster problem’ is acute because women have predicted excuses like this and so unburden themselves of the work of having children and taking care of a home in order that they be qualified for voting! Truly, this is a time where Saudi leadership needs to get in front of social dead weights and actually lead. This is not the 7th C., it’s not the 14th C., it’s the 21st C., where respect for the rights of all humans—male and female—need to be given equal protection. Political rights are among human rights nowadays.

No longer do we have slavery, no longer do governments own people as serfs, or permit them to exist as kulaks. Every single, mature Saudi owns and is owed by his/her government equal protection and equal opportunity. To allow those stuck in time or culture to block rights in the name of tradition is not leadership, not by any definition.

A survey of public opinion on the municipal council elections has revealed that nearly 59 percent oppose women voting in the elections and 72.5 percent are opposed to female membership on the councils. The study, conducted by Riyadh-based ASBAR Center for Studies, Research and Communications, showed that the largest section of support for women voting came from persons who registered to vote but did not use their vote, with 22.8 percent of them in favor. But 19.7 percent of persons who did use their votes were also supportive.

Overall 58.9 percent were opposed to women voting, represented in 60.4 percent of those asked who did vote in the previous elections, 54.7 percent of persons who registered but did not use their votes, and 58.7 percent of persons who did not register to vote. The most common reason given for opposition to women voting in the elections was, according to the study, that it “violates customs and traditions”, a reason cited by 74.8 percent. …

Saudi women, however, aren’t all of an accord that they should bother their pretty little heads with politics.

Saudi Gazette/Okaz also reports that women in Ar Ar, in the Northern Frontier Province, are asking why they’re being deprived of their rights: Women call for inclusion in municipal elections”