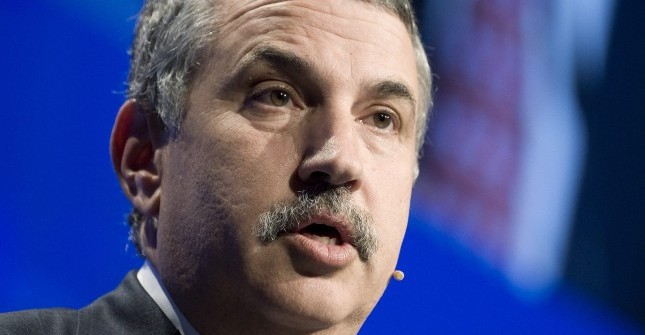 The well traveled journalist Thomas Friedman has popped up in Yemen, but apparently he has yet to find out that no one in Yemen drives a Lexus and Yemenis do not grow olive trees. Friedman has won many awards for his hot-air balloon reporting of events in the Middle East. He reminds me of Mark Twain’s Tom Sawyer Abroad, where the American boy hero gets a birds-eye view of Egypt and Palestine without ever escaping being mere “innocents abroad.”

Still, a postcard from Yemen via the New York Times op-ed page, by such a renowned journalist deserves a reading. As usual the journalist himself is one of the main attractions, including starting the very first sentence with an “I” to his own presence. I am not a fan of Friedman’s reportage, even when he claims some kind of inside knowledge about a place in the Middle East, but I do appreciate that two very important points are highlighted in his article: Yemen’s water crisis is a greater threat to instability than any political act and Yemen is poised to “have the best chance to start over – now – if they seize it.” I would only add this: if Saudi Arabia, the Gulf States and the U.S. do not keep the Yemenis from seizing and sustaining control of their own future.

Like Friedman, I have long known that Yemen is “a country of breathtaking beauty, with wonderful people” and, yes, it has become a “human development disaster.” But I would not explain this disaster away as simply due to “political mismanagement” by a string of military dictators. The United Nations, the World Bank, the United States, Britain, France, The Netherlands, Japan, China and a rather long list of foreign aid donors have pumped millions upon millions of dollars into a system without achieving any sustainable results. Saudi money has bankrolled the Ministry of Education, introducing a conservative Salafi brand of Islam that is overtly political. Yemeni workers have been treated like slum bums by the Saudis and Gulfies who hire and fire them at will. While Friedman is right to stress that the environmental and economic crisis created by the critical shortage of water, especially for domestic use in cities, is the major problem being faced, it is not “just about water” by any means. The heavens and fountains of the deep could open tomorrow and the mix of old and new ideologies (most coming from outside Yemen) would blossom like spring flowers after a desert rain.

One would think that Friedman might realize by now that assigning sectarian identity to Muslims does not really work with an axis-of-evil mentality. He might even look at Wikipedia to learn about the Huthi rebellion in the north. It was not started by Iran, and being a Zaydi Shi’a Muslim does not mean that these Yemenis are a creation of the Twelver Shi’a in Iran. By the way, as a historical footnote that a postcard may not have room for, the Zaydi imamate started in the 10th century in Yemen (and a little later in Iran), long before a Shi’a state was established in Iran. The origin of the conflict was a reaction to the incursion of Salafi ideology and bribe money from the Saudis, coupled with the governmental murder of a prominent parliamentarian with tribal backing. It was not a peasants’ war of “young, unemployed farm laborers” as Friedman suggests. Nor has the Sa’da region in Yemen’s north been the lush fruit-growing area that the former Minister of Water and the environment apparently claimed.

Friedman missed his chance to talk about the implications of a large part of the Yemeni male work force working for cash in Saudi and the Gulf, prior to being thrown out right after Saddam invaded Kuwait. These “unskilled” men earned the wages that fueled local development in the 1970s and early 1980s. The money poured back directly to villages for building roads, electric generators, improved water systems, schools and other community projects at a time when the central government was unable to provide such services to the entire country. Instead of blaming Yemeni women for cutting down the few remaining trees for firewood, Yemeni women, with the help of other household members, were able to maintain many farms. There was indeed an abandonment of rainfed terraces, but not directly because of a lack of labor. Marginal rainfed agriculture was subsistence-based at a time when there was a wholesale digging of wells for unprecedented levels of irrigation on non-terraced land and over-utilization of aquifers. Rather than relying on what the former minister apparently said, Friedman might have fact-checked the history of coffee production in Yemen. Yemen stopped being a viable producer of coffee for the international market a couple of centuries ago. Most coffee was not irrigated by wadi flow, as it is a highland crop.

Then there is the misinformation on qat, the Yemeni term for Catha edulis, the leaves of which are stored in the mouth as a stimulant. Qat is not and never has been a “narcotic.” It does not induce sleep, nor create hallucinations. Try some, Tom, and see how “high” you get. Also, the qat tree does not require a lot of water at all; it can grow solely on rainfed land. There is no fruit; it is the young leaves that are used. If you apply more water through irrigation, you get more fresh leaves and thus more profit. But the plant does not “require” more water than coffee.

It is only a postcard, so I congratulate Friedman for bringing attention to both the worsening environmental context in Yemen and the blossoming political process. As he rightly notes, “There is a ray of hope, though. Yemenis are engaged in a unique and peaceful national dialogue – very different from Syria and Egypt and with about a third of input coming from women – to produce a new leadership.” Thanks, Tom, for the postcard, but next time it might help to use a fact-checker or at least take a quick look at Wikipedia.