There’ll Never Be a ‘Right’ President for Palestine 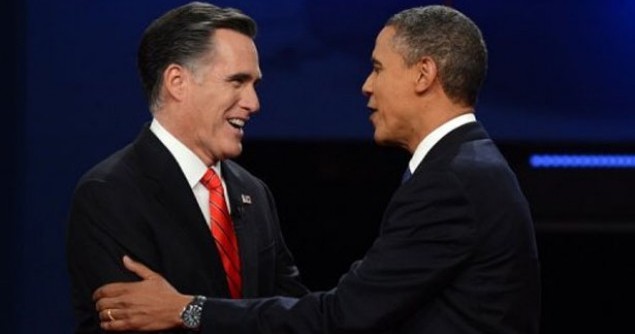 As a Palestinian-American, I awaited the presidential debate on foreign policy with anticipation, given the massive U.S. military footprint in the region of my birth.

I confess to being torn in my attitude to the candidates. From a Palestinian perspective, I know there is little difference: Neither would take effective steps to end Israel’s 45-year occupation, challenge its illegal building of settlements, or shake its draconian hold on Jerusalem.

Their record speaks for itself. President Barack Obama soon gave up on the Israeli settlement freeze he pushed early in his tenure. American and Israeli troops are even now participating in a joint missile-defense exercise The New York Times described as “the largest in the history of the two countries’ relationship.”

Just last month, billionaire Israel and Obama supporter Haim Saban spoke glowingly about the steps Obama had taken to make Israel feel more secure, including increased aid. That Obama could go further than past administrations is mind-boggling. Israel was already the largest cumulative recipient of U.S. foreign assistance since World War II, having received some $115 billion by 2012 according to the Congressional Research Service – even though it ranks 33rd in the OECD’s rich-country club.

As for presidential candidate Mitt Romney, he repeatedly asserts he’d be “better” for Israel than Obama, and he made that case Monday night as both candidates raced to establish their pro-Israel bona fides while failing to say a single word about Israel’s oppression of the Palestinians. Romney’s earlier remark effectively outsourcing U.S. Middle East policy to Israel still resonates in Palestinian ears – the one where he said that, if elected, he’d call his “friend Bibi Netanyahu” and ask what the Israeli prime minister would like him to say and do.

Last month Romney further spelled out his Middle East policy in another of those secret videos that have marked his candidacy. He laid into the Palestinians as having “no interest whatsoever in establishing peace” and pledged to “kick the ball down the field” for the foreseeable future.

In short, for the Palestinian people, four more years of Obama or four years of Romney means continued U.S. financial and diplomatic support to Israel, including a U.S. veto at the United Nations as needed.

But, as an American, I view the Obama-Romney stance on foreign policy through very different eyes. Obama has disappointed in many areas. For example, although a lawyer, he has never led the American people in acknowledging that the Bush war against Iraq actually contravened international law.

He “surged” the war in Afghanistan rather than recognizing both its futility and the harm it has caused to the Afghan people as well as to the U.S. He has ramped up an unprecedented policy of assassination by drone that kills many innocents, trashes due process, and doubtless creates as many enemies as it purportedly “terminates.”

However, the Obama Administration has stood fast against pressure by Israel and U.S. neocons to support or join an Israeli military attack to stop Iran’s nuclear program, albeit at the cost of sanctions that are taking a very heavy toll on the Iranian people. A U.S. attack on Iran would drag the region into a war that could eclipse even the calamitous outcomes of the Iraq and Afghan wars.

Although Romney as an individual might be more moderate than Romney the candidate, the fact remains that, if elected, he would open the door to the same neocons that brought us the war on Iraq, many of whom serve as his and his vice-president’s advisors. And that is a very frightening thought indeed.

Romney’s posture on war and peace, together with his domestic agenda on the rights of women, social security, health care, and just plain unfair economics, drives me to support Obama.

As for the Palestinian people, the task is to develop those sources of power that will impose the quest for freedom and rights on the U.S. policy agenda rather than wait for the “right” U.S. president.

This is a tall order. But Palestinian civil society is already posing a strong challenge through the growing global movement to boycott Israel until it upholds international law. And, although the jury is still out on how the changing Arab political environment will impact the Israeli-Palestinian conflict, the era of U.S.-supported dictatorships is clearly at end in Egypt, the most important Arab country. Beyond the Middle East the balance of power is shifting away from the U.S. with repercussions for its hegemony. The time when we see a different U.S. approach to the region may be closer than we think.

Nadia Hijab is director of Al-Shabaka: The Palestinian Policy Network, and an author and public speaker