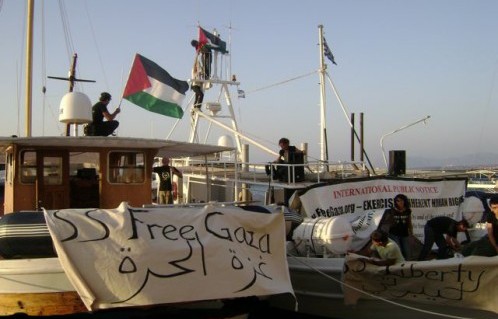 According to Ha’aretz (Hebrew),* two American women who were would-be passengers on the “Audacity of Hope” became the first of the flotilla activists to directly confront the Israeli blockade, not of Gaza, but that of the West Bank. The two did not attempt to go to Gaza by boat as planned, instead they flew to Israel from Athens and appeared at Ben-Gurion airport today (July 8) wearing t-shirts identifying themselves as participants in the flotilla. In so doing, they joined the “Welcome to Palestine” protest which has been dubbed the “flytilla.”

The two women, whose photographs appeared in the newspaper (see above) were not named by the paper.  They were briefly questioned by airport officials, then placed on an airplane bound for the United States.

At the airport, the “flytilla” protesters declared their intention to travel to the West Bank in order to demonstrate that the Israelis do not permit foreigners free access to the occupied territories. They made their point loudly and clearly as reported by the media worldwide. Although the protesters declared that their intentions were to participate in only legal non-violent activities, 65 people were jailed and four were placed on departing airplanes. Israeli authorities said the detainees would be deported this Sunday.