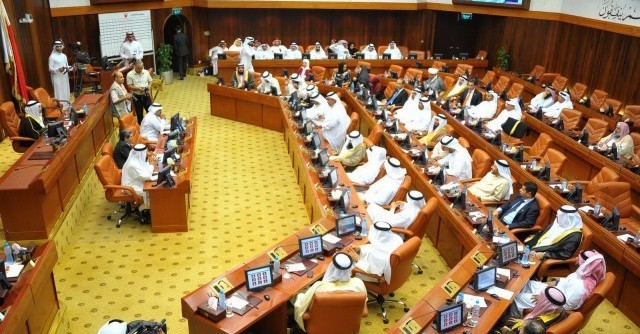 Those temperate souls in the Bahrain Parliament were at it again last week.

The Gulf Daily News – demonstrating what a bastion of unbiased reporting it is – took a break from reporting the daily condemnations by leading ministers of the “thugs and terrorists” who are blamed for the current state of the country. Instead, they chose to sit in on a lively debate in parliament. Since the political composition of the lower house has been somewhat skewed by the resignation in 2011 of the 19 members of the Al-Wefaq political society – the group that has taken much of the blame for the troubles of the past two years – you would expect that the current members would be violently agreeing on most matters placed before them.

Apparently not. According to the GDN, in yesterday’s deliberations, Islamist MP Abdulhaleem Murad said this about remarks by a fellow member:

“What nonsense comments have come out of his mouth? We should not stay silent against those silly words. There are no loopholes in religion, with good and evil being clear. Those words only come from a devil with satanic intentions.”

So what were the devilish, satanic, atheistic ideas being thus condemned? You might think that the object of such contempt was proposing something seriously radical, such as the abolition of religious teaching in schools, or the incorporation of the religious holidays of other faiths into the national holiday schedule.

Not so. The recipient of the broadside was suggesting that it was a mistake to establish a government-funded academic institution for exclusively for women. Again according to the GDN:

“Bahrain Bloc MP Ali Al Durazi had criticised the Islamist MPs’ plan, saying males and females should mix and it was up to them to control their desires. “It doesn’t matter if females and males are segregated or are mixed in classrooms, lectures or even at work and in general life,” he said.”Desire is found in everyone’s soul.

“We can’t stop people from fulfilling their desires if they want to do so and it is a choice to control it or let go. The problem is within people themselves, when they lose their senses and shut off their conscience.”

I suppose the idea that people should act according to their consciences is pretty radical. And there are countries nearby where, if he had made those statements, Mr Al Durazi would be in fear for his safety at the very least, and in real danger of being hauled off to jail.

“Acting parliament chairman Abdulla Al Dossary ordered the comments to be removed from the official record, but Mr Murad said they were already recorded in God’s eyes.”

That’s all right then. No one can say they weren’t warned of the coming retribution.

When I read about the exchange, I thought to myself how different were the proceedings to those of my own dear Parliament in the UK. But then I thought of Oliver Cromwell’s words when he shut down the Rump Parliament that had lingered on after the demise of King Charles I, as reported by Thomas Salmon in his Chronological Historian:

“[Cromwell] commanded the Speaker to leave the Chair, and told them they had sat long enough, unless they had done more good, crying out You are no longer a Parliament, I say you are no Parliament. He told Sir Henry Vane he was a Jugler [sic]; Henry Martin and Sir Peter Wentworth, that they were Whoremasters; Thomas Chaloner, he was a Drunkard; and Allen the Goldsmith that he cheated the Publick: Then he bid one of his Soldiers take away that Fool’s Bauble the mace and Thomas Harrison pulled the Speaker of the Chair; and in short Cromwell having turned them all out of the House, lock’d up the Doors and returned to Whitehall.”

Not being a journalist or an academic, I unapologetically thank Wikipedia for that quote.

More recently, we have had our share of ripe insults in the House of Commons. In 2010, the Health Minister was reported as muttering under his breath that the Speaker, John Bercow, was a “stupid, sanctimonious dwarf”. Then there was Denis Healey’s famous remark when, as the UK’s Chancellor of the Exchequer, he likened the criticism of his budget by his opposite number Geoffrey Howe to being “savaged by a dead sheep”.

Even in New Zealand, that great exporter of dead sheep, and not a country with a reputation for rabble-rousing, parliamentarians have got into trouble for little gems such as these:

“Idle vapourings of a mind diseased”
“His brains could revolve inside a peanut shell for a thousand years without touching the sides”
“Energy of a tired snail returning home from a funeral.”

Again my thanks to Wikipedia, this time for the wisdom of the Antipodes.

Last week’s contretemps in Bahrain’s parliament is not the first of its kind. A few months ago, for example, another MP almost set off the sprinklers by burning an Israeli flag in the chamber.

Whatever your thoughts about the current situation in Bahrain, you have to have some sympathy for a government pincered between opposite extremes of the sectarian spectrum.

You could even understand if, in their darker moments, there were not ministers who might dearly wish that they could adopt Cromwell’s tactics with the Rump Parliament – minus the insults of course.