“Thank You, Vladimir.” What Obama Should Say to Putin 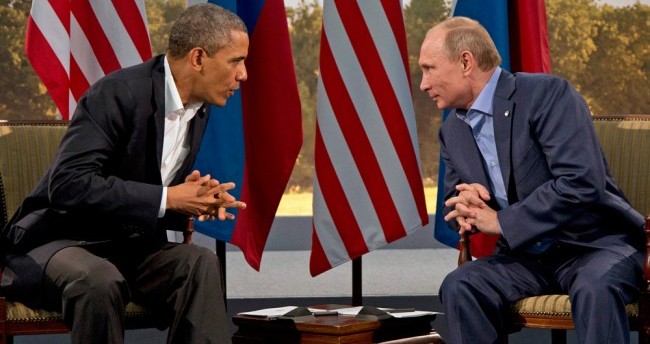 Secretary of State John Kerry was asked at a press conference in London Monday morning if there was anything that could forestall a US missile attack on Damascus, and he replied off the cuff that Syria could surrender its chemical weapons stockpile to the international community within a week.

Russian President Vladimir Putin and Russian Foreign Minister Sergei Lavrov pounced on Kerry’s comment, abruptly announcing that Russia would see what it could do. Lavrov said, “If the establishment of international control over chemical weapons in that country would allow avoiding strikes, we will immediately start working with Damascus . . . We are calling on the Syrian leadership to not only agree on placing chemical weapons storage sites under international control, but also on its subsequent destruction and fully joining the treaty on prohibition of chemical weapons,”

Syria’s portly Foreign Minister Walid Muallim clearly knows how to chow down while the meal is still hot, and he wasted no time embracing Lavrov’s suggestion. Muallim said, “The Syrian leadership welcomes the Russian initiative because of its own eagerness to preserve the lives of Syrian citizens and ensure the security of the country, and given our confidence in the desire of the Russian leadership to prevent an attack on our country.”

Senate majority leader Harry Reid immediately postponed a vote on a Syria attack by his body that had been scheduled for Wednesday.

The indications were that President Obama might well not get 60 votes in the Senate for his attack on Damascus, and Reid must have exhaled a big sigh of relief. As for the House of Representatives, the likelihood of it voting to allow Obama to fire cruise missiles at Syrian targets is between slim and none.

To that extent, Putin’s suggestion (and it was his; Lavrov doesn’t have an independent power base and does as the president tells him) functions to save Obama a lot of trouble.

He can now possibly avoid the most embarrassing defeat in congress of a president on a major international issue since that body told Woodrow Wilson where he could stick his League of Nations.

Likewise, Putin’s proposal ironically helped soothe troubled waters in the European Union. German Chancellor Angela Merkel was by all accounts absolutely furious at Spain, Britain and France for issuing a statement at the G20 meeting in Moscow supportive of President Obama’s condemnation of Syria for chemcial weapons use (though they did not back a military attack on Syria). Merkel reprimanded Spain in particular for not waiting for a joint European Union statement. (For Spain to defy Germany at this point in time is rather like a deeply indebted gambler being rude to the casino owner). Spain for its part only talked a good game, going on to say that Spanish law forbade the Spanish military from in any way being involved with the US assault on Damascus, since it is not in self-defense.. It is not clear what Prime Minister Mariano Rajoy was supporting at the G20, if he thinks military action so illegal that Spain has to avoid having anything to do with it. And, of course, the British Parliament had rebuked Prime Minister David Cameron for considering joining the US in air strikes on Syria.

Putin’s gambit is irresistible to the West, even if it amounts to nothing. After all, it will take time to amount to nothing, and with the passage of time the urgency of military action (already low) will dissipate irrevocably.

The Russian initiative is not attractive because it seems practical or likely to be swiftly implemented but because it allows everyone involved to save face. Obama can look statesmanlike. He is already taking credit for Putin’s move, saying it would not have come about without his own saber-rattling.

The US Congress might be able to avoid the uncomfortable position of agreeing that Syria is guilty of chemical weapons use but declining to do anything about it.

And, the European Union was desperately looking for some step that could avoid further friction within the deeply divided organization.

All this is good news for Western politicians and bad news for the Syrian rebels, who are denouncing the Russian initiative as mendacious. They had hoped that the US would degrade some key regime capabilities, especially the bombing of airports that the regime uses to resupply its troops. Of course, even before the Putin Plan, it was increasingly unlikely that Obama would gain authorization for such a step, in any case.

The one good thing about this development is that it strengthens Russia’s position with the Baath government of Bashar al-Assad and may lend new energy to Moscow’s determination to broker a compromise between the rebels and the regime.

Without a US or Western bombing campaign, the Syrian regime is likely just strong enough to hold on for years. The rebels’ advance of last spring has stalled and in some places been reversed. Some sort of negotiation now seems likely. While in my view the two sides are not yet desperate or exhausted enough to make that sort of agreement the Lebanese acquiesced in at Taif in 1989, they may be able to take small steps toward that eventual outcome, which increasingly seems the most plausible one