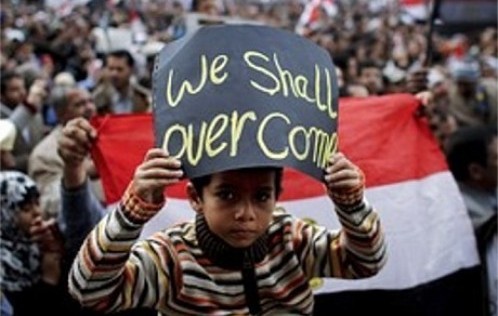 The goalkeeper of the Syrian national Under-23 soccer team as well as well as for the Al Karama soccer club in Homs, a focal point of the eight-month old uprising against embattled President Bashar al-Assad, is emerging as a leader of the protests in the city’s Al Bayyadh district.

Abd al Basset Saroot appeared briefly on Saturday on Al Jazeera wearing a bandana and talking on a mobile phone to confirm that his brother and 11 others had been killed in the government’s brutal crackdown on anti-government protesters. Mr. Saroot said he was standing in the place where the 12 people died as he was speaking to Al Jazeera. He held up for the camera empty shells, which he described as the “Iranian heavy weapons” with which the protesters were attacked.

Speaking hours before the Arab League gave Syria three days to halt its brutal crackdown before it suspended the country’s membership and imposed sanctions on the Assad regime, Mr. Saroot called on the League to let the UN Security Council deal with Syria if it were unable to do so itself.

“We have become too used to hearing about the issuing of resolutions which are never implemented,” Mr. Saroot said, adding that too many had already been killed. The United Nations estimates that 3,500 people have died since protests erupted in March. The Arab League gave Syria the three-day deadline that ends on Wednesday after Syria flouted an earlier agreement to end the crackdown and negotiate an end to the crisis.

Mr. Saroot asserted in a You Tube video several months ago that the Assad regime was accusing him of being a Salafi, a fundamentalist who seeks to emulate life as it was in the time of the Prophet Mohammed, and was seeking to turn Syria into a Salafi state.

“This accusation was made when we took to the streets, demanding freedom for the Syrian people. I am now wanted by the security agencies, which are trying to arrest me. I declare, in sound mind and of my own volition, that we, the free Syrian people, will not back down until our one and only demand is met: the toppling of the regime. We are not Salafis, and there is no truth to the regime’s claims about armed groups or a Salafi emirate,” Mr. Saroot said.

In August, Mr. Saroot reported on YouTube that Syrian security forces had arrested national soccer goalkeeper Mosab Balhous on charges of sheltering armed gangs and possessing suspicious amounts of money. He said Mr. Balhos too had been accused of participating in anti-government protests and wanting to establish an Islamic emirate in the city of Homs.

In a column in the London-based Arabic daily Al Quds al Arabi, Elias Khoury describes a documentary entitled Al Waar (Rocky Terrain) by an anonymous Syrian filmmaker that portrays Mr. Saroot as a leader of the protests and a composer of some of its slogans and songs. “His features are Bedouin, he is a thirsty person who is not satisfied with only freedom … It is he who composes for the nocturnal gatherings for a popular festival in the suburbs of Homs where the air bears bullets. The slogans are an appeal by a decapitated nation and the will of a people determined not to bow to anyone,” Mr. Khoury writes.

“Go is the cry of the brave, A cry of the city with Bedouins, A cry of all religions, The cry of Syria and the land it covers: Let them leave him and his dogs and the destruction they have wrought,” the film quotes the chants of the protesters crafted by Mr. Saroot.

Mr. Khoury describes Mr. Saroot as the protagonist of the film whose voice challenges the Assad forces’ weaponry. “Our weapon is our voice,” Mr. Saroot says in the film.

The film describes how the regime has put a reward of one million Syrian pounds ($20,000) on the heads of alleged Salafis like Mr. Saroot. The goalkeeper smiles at the word Salafi and chants: “Shed tears, shed for the young victims and Syria.”

Throughout the film a picture of Bashar al-Assad superimposed on that of his father, Hafez al-Assad, constitutes the background with the words, ‘Assad or nothing,’ a play on the slogan that accompanied the portrait of Hafez during his rule: ‘Our leader in eternity and beyond.’