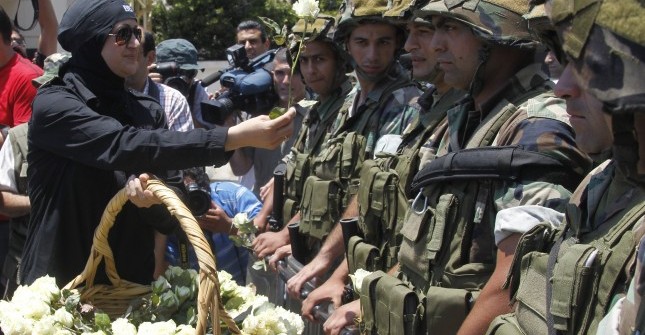 Lebanon held its breath when clashes erupted on 17 June between the Lebanese Army and armed men loyal to the militant Sunni cleric Ahmad Al-Assir after Al-Assir’s men opened fire on a Lebanese army vehicle. The clashes escalated into a full-blown battle in Sidon, Lebanon’s third largest city, on 23 June. More than 50 soldiers were wounded and 16 killed, along with 13 of Al-Assir’s men.

Once again, we Lebanese wondered how long the violence would last and how strong the veneer of normalcy holding the country together actually was.

Al-Assir fortified himself in a mosque in Abra (a Sidon suburb). And while residents of Sidon and Tripoli hid in their homes in fear of gunmen and mortar shells, Al-Assir called for backup via Twitter, decrying what he called a “war on Sunnis.”

But Al-Assir was not the only voice on social media platforms during the clashes. The social media sphere exploded with comments across Lebanon about the incident. Interestingly, the response to Al-Assir’s sectarian rhetoric was solidarity and support for the army, one of the only national institutions that can truly unify the Lebanese. It struck me how many different Lebanese rallied behind our national army, offering a glimmer of hope that we might perhaps shake the yoke of the narrative of sectarianism that we have held fast to.

Al-Assir’s highly sectarian narrative of the events relied on age-old rhetoric that has been proving effective for years. In Al-Assir’s tweets, the events were not about an illegal armed group fighting the nation’s army, but rather about defending women, children, faith and a mosque against a corrupt force aided, according to him, by Iran-backed Hezbollah.

Such aggressive and emotionally poignant rhetoric has been used as a powerful weapon in Lebanon’s history. Reminiscent of past sectarian rhetoric, Al-Assir demanded that Sunni members of the Army defect to his ranks.

Instead the Lebanese found comfort in each other’s messages on social media. With increasingly frequent cases of violence, dark humour online has served to relieve tension.

This time Twitter, Facebook and blogs were flooded with tributes to the soldiers who fell and messages of thanks from a people that still want to believe in our country. One blogger for example, Nader Dagher, dedicated a poem to the Lebanese army called “Heroes from Lebanon” which has been reposted continuously on Facebook. Even private companies have joined the movement with ads to show their solidarity with the army.

In the aftermath of the Arab Spring, there has been a wave of political empowerment of Sunni political parties and sectarian conflict. In this context it’s easy to lump the clashes in Sidon into this paradigm. Yet there’s more than this going on in Lebanon. Many people in Lebanon find refuge, protection and identity in their sect more so due to a weak national identity.

And many Lebanese want to get beyond the sectarian mentality. However there are few unifying institutions. The support shown for the army is a show of faith in one institution that can unify the Lebanese people, and a leap of faith in a united Lebanon.

Hand in hand, the soldiers of the Lebanese army, Christians, Sunnis, Shia and Druze work together to protect the country. They symbolise the unity of a very diverse Lebanon. United in their diversity, they represent the Lebanon so many citizens want to believe in.

Nada Akl is a media researcher and journalist in Beirut.