Saudi Elections: Too Soon, And Too Little? 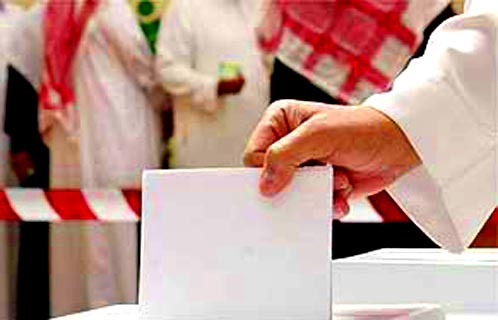 Arab News reports that the government has set a date—April 23—for the second municipal elections to be held in Saudi Arabia. It does not report—though the Associated Press does—that women will not be allowed to take part.

I suspect that the calling for elections next month is intended to assuage demands for more political participation by Saudis. But in setting such a short time table, the government again finds itself unprepared to deal with the issue of women’s voting. Back in 2005, the government pleaded that society wasn’t quite ready and the government too pressed to find a way to accommodate women. Well, it’s now six years later and, not surprisingly, dithering over the issue did not magically come up with a solution. Again, the can is being kicked down the road.

Perhaps the government should go back and look more closely at the recordings of demonstrations in Tunisia, Egypt, and even Iran. Women are in those crowds of angry people. Because Saudi women are not so public in their behavior is no reason to conclude that they are not equally frustrated with the status quo. For now, Saudi women may be invisible under their abayas, but they are half the population. Their unemployment rate is higher than that for men. They are also better educated, representing better than 50% of university students and graduates. One day, Saudi government and Saudi society are going to realize that grown women can no longer be treated as little girls, children who need to be protected and cosseted at every turn. Saudi women have every bit as much concern for the future of the country. It’s long past time to let them have a say in its governance.

There is no reason why these elections could not be postponed another few months while modalities were put in place to allow women’s voting. The elections have already been postponed more than a year; a few months wouldn’t make much difference, except that it would… were it to permit women to take part.

RIYADH: Saudi Arabia on Tuesday announced its plan to hold municipal elections next month after a two-year delay. Electoral commission chairman Abdul Rahman Al-Dahmash said the first phase of voting will be conducted on April 23, 2011.

Municipal and Rural Affairs Minister Prince Mansour bin Miteb set up the electoral commission to supervise elections in all parts of the Kingdom, Al-Dahmash said, adding that it would implement all the election strategies and remove obstacles.
…