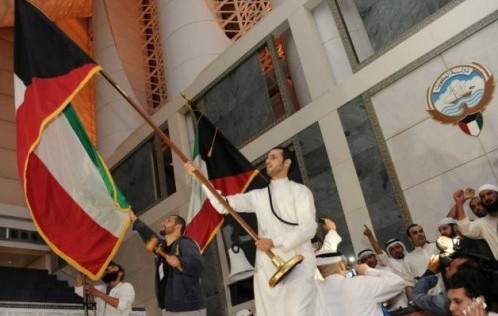 Another ‘Arab Revolution’?  Not quite, it was more of a ‘making a point’ occupation rather than a ‘storming the Bastille’ type move.

And the point they were making was? They would like to see the Prime Minister, Sheikh Nasser al-Mohammad al-Sabah, decide to ‘spend more time with his family’, as the political cliche goes.

So what actually happened?  The demonstrators broke open the gates to the parliament building and managed to enter the main chamber, where they sang the national anthem and then left a short time later.  As the crowd returned to the square outside, the protesters outside shouted: “The people want to bring down the head (of government),” Reuters reports.

Was this a one off demonstration? No, pressure has been increasing over the past few months over claims by the opposition of corruption and perceived attempts to roll back political freedoms.

Could this be the prelude to an Egyptian or Tunisian style uprising? Unlikely as Kuwaiti citizens generally do very nicely thank you, particularly with the generous welfare system that prevails.

But worth keeping an eye on developments?  Absolutely, if there is one thing we’ve learned over the past year in the Arab world it’s that anything is possible.