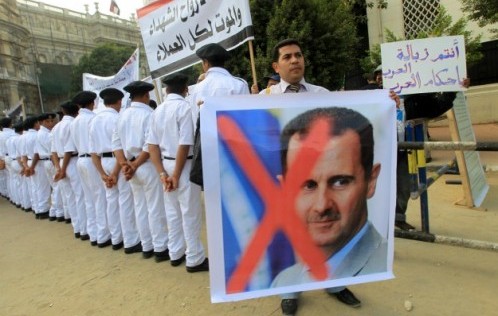 What’s the Story?  Syria has decided not to attend the Arab League meeting which is taking place in Rabat, Morocco.

This is hardly a jaw-dropper, is it, since the Arab League is threatening to throw them out soon.  Ah today was the given the day for Syria’s exit following their failure to implement a peace plan proposed by the League.

The pressure is certainly being ramped up on President Assad.  It’s getting more difficult by the day for him – yesterday, for instance, King Abdullah of Jordan became the first Arab leader to call publicly for his resignation.

And today?  Saudi Arabia’s former intelligence chief and former ambassador to the United States, Prince Turki al-Faisal, said the departure of the Syrian leader was “inevitable”

But wasn’t the Arab League the very definition of a ‘toothless talking shop’? A metaphor that elicits a curious image but, yes, the body has certainly become ‘dentally virile’ as far as Syria is concerned.

And why might that be?  Many commentators see Qatar – which led the moves to suspend Syria – taking a much more robust role in its relations with its Arab brothers.  This is attributed to a variety of factors – its incredible wealth, its leading role in supporting the overthrow of Qaddafi and of course it’s the home to arguably the Arab world’s most important media organisation, Al Jazeera.

And the Saudis? They too have played a key role which explains why both Qatari and Saudi embassies were attacked in Damascus by pro-Assad supporters.

So have the Syrian authorities offered any olive branches to the League?  They claimed on Tuesday that they had released more than 1,100 prisoners detained since the beginning of the protests.  This was widely seen as a move to appease Arab League demands.

Will it work? Very unlikely – much too little, much too late.