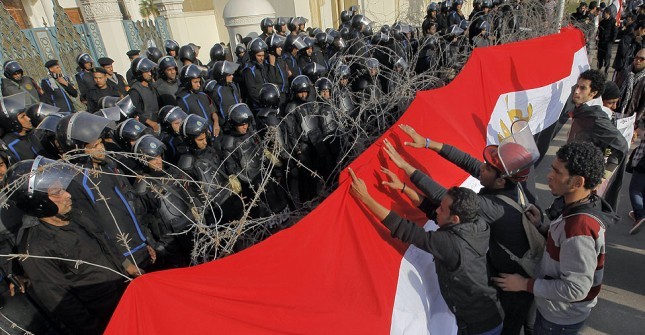 Egyptian President Mohamed Morsi may or may not survive Sunday’s massive protests, organized by the youth Rebellion (Tamarrud) Movement. They are, nevertheless, a milestone in modern Egyptian history and a warning to him about his arrogant and highhanded style of governing from his fundamentalist base.

Morsi, from the Muslim Brotherhood, represents the equivalent of the American Tea Party in Egyptian politics—captive to the religious right, invested in austerity and smaller government, and contemptuous of workers and the political left.

In his first year in office, the nation’s first freely elected head of state has squandered Egyptians’ willingness to give him the benefit of the doubt. He has acted like the president of the somewhat cultish Muslim Brotherhood, rather than like the president of the whole country. Here are the major errors he has made, which have polarized Egypt and created a severe crisis that some observers worry could turn into a civil war.

On taking office in summer 2012, Morsi did not appoint a government of national unity. He named no politicians from other major parties to important cabinet posts, nor did he reach out to the revolutionary youth. Although he made a neutral technocrat, Hisham Qandil, his prime minister, he put members of the Brotherhood’s Freedom and Justice Party in charge of key cabinet posts. He thus created the impression that he was trying for a “Brotherization” of the government.

Despite Egypt’s sagging economy, Morsi did not make stimulating it his first priority, and instead tried to please the International Monetary Fund with austerity policies, rather on the model of the Mariano Rajoy government in Spain. The Brotherhood’s class base is private business, whether small or large, and Morsi has been distinctly unfriendly to the demands of labor unions and to those of the public sector, which account for half of the country’s economy. In 2009, economists such as Paul Krugman warned that Barack Obama’s stimulus was far too small. Morsi, steward of a much more fragile economy, put forth no stimulus at all.

Once he became president, Morsi had an opportunity to address the inequities in the constitutional drafting committee, which was disproportionately in the hands of fundamentalist Muslim Brothers and Salafis, marginalizing liberals, leftists, women and Coptic Christians. He had promised that the constitution would be consensual, but that body was highly unlikely to produce a widely acceptable organic law for the nation. Morsi let the unfair composition stand, and he appears to have been afraid that it would be struck down by the courts (it finally was, long after it mattered, in the spring).

In November 2012, Morsi abruptly announced on television that he was above the rule of law and his executive orders could not be overturned by the judiciary until such time as a new constitution was passed. He seems in part to have been trying to protect the religious-right-dominated constitutional drafting committee. His announcement enraged substantial sections of the Egyptian public, who had joined to overthrow dictator Hosni Mubarak precisely because the latter had held himself above the rule of law.

In response to the massive demonstrations that his presidential decree provoked, Morsi pushed through a constitution that is unacceptable to a large swath of Egyptians. Even though two dozen members of the drafting committee resigned to protest key provisions of the draft constitution, which they saw as back doors for theocracy, Morsi accepted the Brotherhood/Salafi draft and presented it to the nation in a countrywide referendum.

Egypt’s judges, who are supposed to preside over and certify the balloting, went on strike, but the president forged ahead anyway. Only 33 percent of voters went to the polls, many of them supporters of the president. The constitution was passed, but much of the country clearly was uncomfortable with it. Morsi’s promise of a consensual document was hollow. The referendum could not be certified as free and fair by international standards.

All the trouble Morsi caused by announcing himself above the law and ramming through a controversial constitution with some theocratic implications caused a new round of demonstrations and instability, which harmed Egypt’s prime fall-winter tourist season.

Tourism represents 11 percent of the Egyptian economy and employs more than 2 million professionals, but travelers looking for pyramids, not protests, have stayed away the last two years. In 2011, tourism was off by a third. Even as visitors began coming back this spring, they spent less money than they would have three years ago, since hotel and other prices have fallen.

I was told by Marriott employees in Egypt when I was there in early June that visitors are now mostly going to enclave sites such as Sharm El Sheikh and Hurghada, not to Cairo and Luxor on Pharaonic tours. They said that tourism from the Gulf oil monarchies was moribund (Morsi has bad relations with the United Arab Emirates, and besides, many Gulf travelers had been trying to escape the stifling atmosphere of fundamentalist governments in Egypt’s easygoing cabarets, many of which have closed or canceled belly dance performances).

The falloff in tourism revenue has cost Egypt billions in income and foreign currency reserves. The Brotherhood, made up of religious fundamentalists, appears not very interested in the tourist sector, which depends after all on liquor, cabarets, beaches and bikinis or on foreigners’ fascination with ancient Egyptian idolaters—i.e., on everything Muslim fundamentalism stands against. The instability also harmed foreign investment, even from the Gulf oil states, since no one wants to build a tourist hotel or office building that may not make money under Brotherhood policies.

The collapse of tourism and the lack of private investment caused Egypt’s foreign currency reserves to fall from $36 billion to $15 billion in only two years. Because the foreign reserves were the tool used by the Central Bank to defend the value of the Egyptian pound, it suddenly lacked the ability to prevent devaluation against the dollar. Since early in the last decade, the pound has been allowed to float against other currencies but the float is “managed.”

The decline in value of the pound caused food and diesel prices to rise (Egypt is a net importer of food because it covered its best farmland along the Nile with concrete in order to urbanize). A third of Egyptians live on $2 a day, and they are very sensitive to food and fuel price inflation. Morsi is widely now thought to have been more interested in winning political victories over his opposition and promoting the interests of the religious right than in getting the economy humming again.

Once the constitution was approved, Morsi moved to create the fiction that he had a functioning legislature, packing it with Muslim Brothers. The lower house of parliament elected in fall 2011 had been struck down by the courts, since the Muslim Brotherhood and the Salafis had run party candidates for most of the seats set aside for independents (one third of the total), and these party candidates easily defeated unknown and poorly funded independents.

Morsi abruptly appointed 90 members to the previously largely ceremonial upper house, a significant number from the Freedom and Justice Party and its allies or fellow travelers of the religious right. He then declared that the upper house could independently legislate, even in the absence of the elected parliament, and even though only 7 percent of its seats were elected. The religious right began crafting legislation. The courts struck down the upper house in June, though to no great effect.

Last month, Morsi suddenly appointed 17 provincial governors (governors are appointed, not elected, in Egypt, which is one of the things wrong with Egyptian politics). Several of them were Muslim Brothers or Salafis, and one was a member of the al-Gama’a al-Islamiya, a former terrorist group. Adel al-Khayat was appointed to govern Luxor, the site of the Valley of the Kings and a major tourist destination.

The Gama’a had conducted a terrorist strike there, killing dozens of tourists in 1997. Luxor was not willing to forgive the Gama’a, and demonstrators demanded that the appointment be withdrawn. Al-Khayat resigned last week. Again, that Morsi was using his position as president to turn the Egyptian government over to the religious right, and sometimes to its most extreme wing, frightened and angered liberals, leftists, Coptic Christians and women.

Morsi’s various decrees, announcements, policies and appointments have created apprehension among millions of Egyptians that his primary goal is deploying the power of the state to impose religious fundamentalism on the country and to ensconce his Muslim Brotherhood permanently throughout the government and the judiciary.

The fear of liberals concerning Muslim fundamentalist groups had long been that they would behave as the German National Socialists or as the Stalinist Communists had, participating in elections only until they won, and then arranging for a one-party state thereafter. There is no evidence that Morsi has such a design, and he did try to schedule parliamentary elections in April, but the plan was struck down by the courts because he did not consult them on the enabling legislation.

But Morsi, given the widespread fear of the Muslim Brotherhood in Egypt, had a responsibility to go out of his way to allay those anxieties. Instead, he reinforced them at every turn. Egyptians have been galvanized and politically mobilized by the events of the past 30 months, and refuse to be quiet in the face of what they see as incompetent government and unfair Brotherization.

Morsi so far has refused to get the message, secure in the support of his base and the legitimacy bestowed by winning the June 2012 election. Whether he finally demonstrates more flexibility in the aftermath of the recall movement against him will determine whether Egypt returns to prosperity or faces more years of instability.