Millitant Football Fans To The Fore Again in Egypt Protests 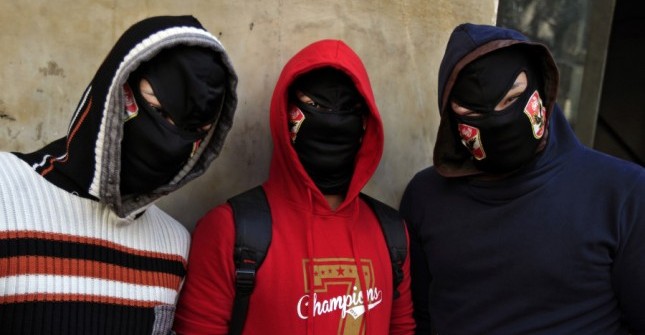 Egyptian President Mohammed Morsi and militant, street battle-hardened soccer fans, in a replay of the run-up to mass protests two years ago that ousted Hosni Mubarak are positioning themselves for planned watershed mass demonstrations for and against the government this weekend.

In a statement almost identical to the one they issued on January 24, 2011, the eve of 18 days of protests that toppled Mr. Mubarak, Ultras Ahlawy, the militant support group of crowned Cairo club Al Ahli SC that played a key role in the former president’s overthrow, said this week that as an organization it would not participate in the demonstrations on the anniversary of Mr. Morsi’s ascendancy as Egypt’s first freely elected president, but that its members were free to do so.

The statement insisted that that Ultras Ahlawy was a group of soccer fans “that has nothing to do with politics.” It said the group had decided “not to get involved in politics again after realizing that the opposition doesn’t care about the country but simply aims to rule.”

Militant Egyptian soccer fans, who constitute one of Egypt’s largest civic groups, have a history of publicly defining themselves as non-political and as a group refusing to openly underwrite political protests. Ultras leaders told their tens of thousands of followers privately two years ago after officially declaring that they would not take part in the Tahrir Square uprising that the protests were the litmus test they had been preparing for and that they were free to participate.

The tactic employed by similar groups in Turkey and elsewhere was designed to shield soccer fan groups from being exposed to allegations that they were political organizations and as a result more vulnerable to government attempts to suppress them. 74 members of Ultras Ahlawy were killed last year in a politically loaded brawl in the Suez Canal city of Port Said.

Ultras Ahlawy as well as the Ultras White Knights (UWK), the supporters of Cairo arch rival Al Zamalek SC, and fans of two other Egyptian clubs last weekend stormed stadiums where there clubs were playing in protests against a ban on fans attending soccer matches. Egypt’s league that restarted in February after a one-year suspension in the wake of Port Said has again been suspended in advance of this weekend’s protests. Zamalek coach Jorvan Vieira announced that he was taking extended leave because of Egypt’s mounting volatility.

This weekend’s protests were organized by ad hoc grassroots group Tamarud (Rebel) that hopes to commemorate Mr. Morsi’s anniversary with a million-man march on the presidential palace. Tamarud has reportedly collected 15 million signatures, two million more than the 13 million votes the president garnered a year ago, on a petition demanding Mr. Morsi’s resignation and new elections.

The petition that a significant number of militant soccer fans are believed to have signed, takes Mr. Morsi to task for his failure to tackle the country’s economic crisis, dispel fears that he is pursuing an Islamist agenda, and his haughty style of government that many see as a continuation of Mubarak’s authoritarianism. It calls on the military and the judiciary in violation of the constitution to lead the country to new elections.

In an echo of terminology used by Mr. Mubarak and more recently Turkish Prime Minister Recep Tayyip Erdogan to denounce their detractors, Mr. Morsi said that the interior ministry had established a special unit to combat thuggery. The ministry controls the police and the security forces that are among Egypt’s most hated institutions because of their execution of the Mubarak-era repression and the deaths of some 900 protesters since the overthrow of Mr. Mubarak for which officials have yet to be held accountable. Brutal police force turned recent smaller protests in Brazil and Turkey into massive anti-government demonstrations much as the brutality of security forces on Tahrir Square two years ago strengthened protesters’ resolve.

Fears of violence this weekend have been further fuelled by the expectation that Morsi supporters will hold counter demonstrations this weekend. Those fears were reinforced by recent attacks by Morsi supporters on Tamarud representatives as they publicly collected signatures on street corners and other public spaces.

Supporters and opponents of Mr. Morsi clashed earlier this month for hours in the Mediterranean city of Alexandria. Two people were killed and more than 200 injured this week in clashes in the Lower Egyptian cities Mansoura and Tanta. Four Shiites were stabbed, lynched and mutilated by a mob in a village near Cairo last Sunday in an attacked that had been motivated by opposition by militant Sunni Muslim sheikhs to a religious feast.

The ultras in past protests in Egypt, much like like-minded groups more recently in Istanbul’s Taksim Square, often see their role as protecting protesters against abuse by the security forces. Their approach is rooted in a deeply rooted sense of having been abused and mistreated for years in clashes with security forces in stadiums. The Black Bloc emerged earlier this year as a group of masked black clad vigilantes founded primarily by battle-steeled soccer supporters with the aim of protecting protesters against violence by Morsi supporters.

The sense that this weekend could mark a watershed in Egypt’s volatile transition from autocracy to a more open society was heightened by a statement this week by the country’s top general describing the role of the security forces as a safety valve against political conflict. Security officials said the military had moved troops closer to Egyptian cities in advance of this weekend’s protest and armored vehicles appeared this week in the streets of Cairo.

Mr. Morsi, in a carefully worded rebuke insisted he was the commander in chief and that the army’s role was solely to protect the country’s borders. Amid wild speculation of what the military may do, much rides on whether the protesters, who see this weekend’s demonstration as a launching pad for a second revolution, succeed in mobilizing large numbers and whether events and to what degree they turn violent.

The last two years have demonstrated that the leaders of violence-prone militant soccer fans are struggling to control their rank and file which often itches for a confrontation with security forces whom they see as the symbol of their perceived misery. Said a young militant earlier this year: “To hell with our leaders. This is not the moment to backdown.”