Kuwait Upheaval A Signal of a More Turbulent Era? 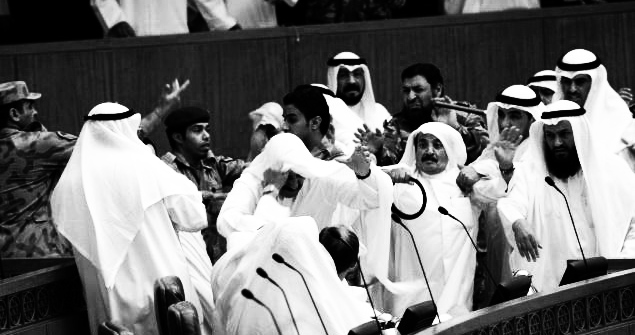 Kuwait is heading for a period of unprecedented turbulence; distinct even in Kuwait’s recent history which has seen Parliament dissolved six times in six years and escalating clashes between protestors and police.

A protest held on Sunday 21 October is thought to have been one of the largest ever held in the Gulf State. The opposition claim that over 100,000 people attended, though independent sources note that 40-60,000 is more realistic. Either way, it was a substantial protest. Though parts of the protest were peaceful; there were also clashes with the State’s Special Forces and Police who used tear gas and rubber bullets to disperse the crowds.

Tensions between the government and the opposition have been growing for years with increasing acrimony displayed on both sides. February 2012 saw the election of a heavily pro-opposition Parliament. Despite taking 34 of the 50 seats in Parliament the loosely defined opposition demanded nine out of sixteen Cabinet seats. They were offered three and accepted none. Consequently this Parliament argued more and got even less done than its predecessors, who had already set a low bar for accomplishment in the past decade.

Amid the usual acrimony and intransigence, two remarkable decisions in June changed the status quo. First, the Emir constitutionally suspended Parliament for one month, the first time that this had occurred in Kuwait’s history. Then, only two days later, the Constitutional Court annulled the February Parliament on a point of procedure and reinstalled the previous more pro-Government Parliament. This was vociferously denounced by the opposition and they refused to sit in the reconvened 2009 Parliament.

Parliament was dissolved on 7 October and elections called for 1 December. However, Kuwait’s constitution allows the Emir to amend laws when Parliament is not in session. Having threatened of the need to ‘correct mistakes’, on this occasion the Emir asked his Cabinet to adopt three laws including one that changed the voting system to one-man-one vote.

This move enraged the opposition who preferred the previous system where each voter could cast four votes. Though the permutations of this change are yet to be worked through, it is most likely that the opposition groups would lose out and they subsequently announced that they would boycott the elections.

This kind of strategy involves a huge amount of jeopardy. With no opposition running, the Parliament will be pro-Government. The Emiri decree, which needs to be ratified by a sitting Parliament, will likely be strongly upheld. This will institutionalise and legalise the system which the opposition fear will, to a greater degree, disenfranchise them.

While there is widespread support for the opposition it is by no means universal. Wavering supporters may well be brought over to the Government’s side if it decides to use a portion of its budget surplus, currently running at nearly $50bn. to increase support through government largess. Debt forgiveness, wage rises, and increased subsidies are a common tactic in Kuwaiti politics and will likely be used again at some stage. Indeed, without the permanent intransigence of the opposition, if the December 2012 Parliament can actually get laws and investment packages passed, then this too will diminish the popular support for the opposition.

Crucially, the fear for Kuwaiti politics as a whole is that the opposition will be left with no tactic or strategy other than confrontation. It is now in the opposition’s best interests to force the Government into as much of an overreaction as possible to maintain support and sympathy. The Government has indicated that it will meet any illegal confrontation head-on, as Sunday’s protests indicate. Additionally, the Government announced a ban on protests of more than twenty people, a move that will strike at long-held principles among many Kuwaitis.

Far from cowed, in response the opposition announced another protest on 11 November and a ‘grand march’ on 1 December; an attempt to undercut the legitimacy of the vote and the Parliament.

Already the political divisions reflect deepening social divisions and these recent events will only worsen the divide. The pro-Government forces see the opposition as deeply obstructionist and resolutely focused on wresting power from their grasp. Both points are true to some degree but the opposition would note that it is only fair that power is shared more equitably given their majority-status and the fact that they have been relatively disenfranchised economically and politically for so long.

Part of this dynamic stems from deep-seated concerns about corruption in the elite, which is seen by the opposition in particular as yet another way that the entrenched elite secretes away more of Kuwait’s money. Aware of this concern, one of the other laws that the Emir asked the Cabinet to adopt referred to the creation of an anti-corruption authority with wide-ranging powers to request financial information from all public employees including Cabinet members, Parliamentarians, and even the Prime Minister. If the Government can establish this institution and instil public confidence in it by making it independent and endowing it with the necessary power and resources, then this could undermine popular support for the opposition.

Aside from the immediate concerns as to the upcoming political, rhetorical, and literal skirmishes between the opposition and government supporters, the escalation of the opposition in reaction to the Government’s policies has had more profound effects.

Previously the Emir was an almost politically untouchable figure. However, this taboo, which had been under pressure for some months if not years, has been thoroughly broken with speeches and marches explicitly criticising his decision to change the electoral law. Any notion that the Emir could remain above the fray is finished. While monarchy as a concept is still resolutely the preferred system, Kuwait is entering a new era. Exactly what this new era will construe is difficult to predict, but it is certain to be more violent as the Kuwaiti elite faces its most significant challenge since the 1990 invasion.

This article first appeared on RUSI.org.