The next battleground: Water more important than oil for Middle East peace 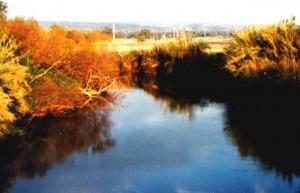 People often associate the Middle East with oil. But in the region’s cities, villages and farms, access to a different resource is becoming rather problematic: water. Addressing this issue can not only ensure a sustainable future, but will also help create conditions for lasting peace.

There is a shortage of water in the region. At the same time, industrial and municipal waste flowing through the Hebron-Besor river basin, which flows from the West Bank through the Negev region in southern Israel and to the Mediterranean, has damaged surroundings and posed serious health hazards to residents in the area, exacerbating current political tensions. Until recently, for example, an ongoing sewage spill from an Israeli West Bank settlement resulted in the contamination of the environment and agricultural fields of an adjacent Palestinian village.

The Jordan River once carried an average of 1.3 billion cubic meters of fresh water to the Dead Sea annually. Today this figure has been reduced to just 20 to 30 million cubic meters per year due to the diversion of 98 per cent of the river’s flow by Israel, Jordan and Syria for agricultural and domestic use. The lack of water coming into the Dead Sea is the largest cause of its rapid disappearance, in addition to extensive mineral extraction.

These examples of water pollution and loss of resources are just one aspect of the Middle East water crisis. Further compounding the problems, decision-makers at national and regional levels continue to show a lack of proper management and planning for the region’s essential water sources: the Jordan River, the Dead Sea, and coastal and mountain aquifers. And the Arab-Israeli conflict often stands in the way of implementing suitable solutions to manage the shared water.

EcoPeace/Friends of the Earth Middle East (FoEME) was founded in 1994 as a group called EcoPeace and today has grown into a unique regional organisation of Israeli, Palestinian and Jordanian environmentalists. It has successfully established cross-border cooperative efforts to raise awareness and address degradation of shared environmental heritage, while creating mutual understanding and trust.

FoEME’s Good Water Neighbors (GWN) project is one example of a programme that generates cooperation. GWN pairs neighbouring communities across the Israeli-Jordanian border, partnering Israeli and Palestinian or Israeli and Jordanian communities with shared water sources to tackle water scarcity and pollution. This interaction allows neighbouring communities to unite for ecological rehabilitation, demonstrating the importance and success of trans-boundary environmental management.

For instance, from 2007 to 2009 the partnering communities of Tsur Hadassah in Israel and Wadi Fukin in Palestine successfully petitioned, campaigned and threatened legal action against the Israeli Ministry of Defense to stop the separation barrier from being built between their communities on the grounds that the damage to their shared water resource would be irreversible. They have undertaken other projects together as well, such as promoting agricultural produce from Wadi Fukin in Jerusalem via a co-op owned by a Tsur Hadassah resident and organising exchange visits between Israeli and Palestinian kindergartens and children’s groups in an effort to counter mistrust and prejudices at an early age; and they are in the midst of planning a park situated between their communities.

Most recently, FoEME has been calling for cross-border coordination between Israel, Palestine and Jordan to ensure the sustainable development of the Jordan River and the Dead Sea even though the World Bank has been conducting an ongoing study of a potential Red Sea-Dead Sea Water Conduit to replenish water in the Dead Sea. This project, however, could pose major risks to the sensitive environment of the Dead Sea and change its unique mineral composition. FoEME is also calling for the rehabilitation of the Lower Jordan River, the Dead Sea’s natural tributary.

Most recently, FoEME organised an event called “Big Jump into the Lower Jordan River” to call attention to the environmental situation of the Lower Jordan River. Mayors, municipal representatives and youth from Israel, Palestine and Jordan took a symbolic jump for the common goal of rehabilitating the river. It is evident that poor water management will continue to threaten the livelihoods of people and the environment in the region unless drastic action is taken to replenish shared ecosystems through a trans-boundary approach.

But as FoEME’s programmes and research show, cross border cooperation can be the pathway to ecological sustainability – and perhaps to peace.

This article was written for the Common Ground News Service (CGNews).

Mira Edelstein is Resource Development and Foreign Media Officer at EcoPeace/Friends of the Earth Middle East, which was recently awarded the Euro-Med Award for Dialogue between Cultures as a recognition of its work promoting intercultural dialogue. For more information about FoEME, please visit www.foeme.org.