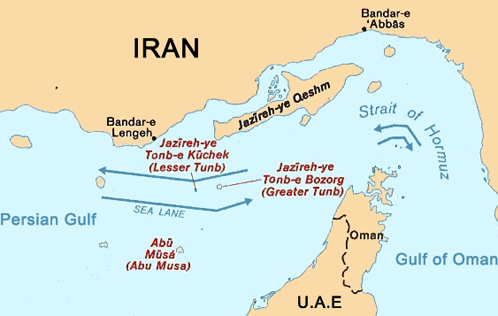 Those of you who know your World War I history will remember that that continental conflagration began with a match lit by the assassination of an Austrian archduke and his wife along a Serbian roadside. Now Pres. Obama has opened yet another opportunity for yet another conflict in the Middle East by warning Iran that if it closes the Strait of Hormuz, the U.S. would go to war.

So you can expand the earlier U.S. claim that we would be willing to go to war only to prevent Iran from getting a nuclear weapon. That now include battling it out over sea supremacy in the Persian Gulf. In this sense, the U.S. is acting as a true colonial power in the old-fashioned sense by projecting its power for reasons that aren’t rooted in intrinsic U.S. interests. It is true that a large amount of the world’s oil supply flows through the Gulf and that its closure would harm the world economy. But there are many ways to deal with the disputes we face with Iran. Threatening war over something like this almost invites war. Now all that would be necessary is for one trigger-fingered Revolutionary Guard speedboat captain or one overeager U.S. Navy officer to press a button and send a ship to the bottom of the Gulf for there to be all-out mayhem.

This has happened numerous times in the past. We shot down an Iranian jetliner killing nearly 300 civilians and they attacked us as well. Imagine if any of that happened now. There would be full scale conflict. We can’t afford this. Yet Obama is walking right into it with his eyes seemingly wide open (or is it “eyes wide shut?”).

Clearly, the U.S. has now given up hope or any chance of using diplomacy to resolve the conflicts with Iran. Now we are reduced to issuing military threats and ultimatums. Right now I’m thinking of that Marx Brothers line:

To war! To war! Fredonia’s going to war!

Except that this war will be far from a Marx Brothers farce. It will be bloody nasty hell. And naturally Israel will become involved pursuing its own interests and anything Israeli gets involved in becomes infinitely more bloody and complicated.

War began from a minor, possibly even imagined incident, in the Gulf of Tonkin. It happened similarly in 1914. It could easily happen again. And if you think Barack Obama is too smart or too liberal a president to get us into something like this, you’re wrong. Lyndon Johnson walked into the Vietnam War in a similar way. All of Europe ended up slaughtering each other by the millions for a similar reason.