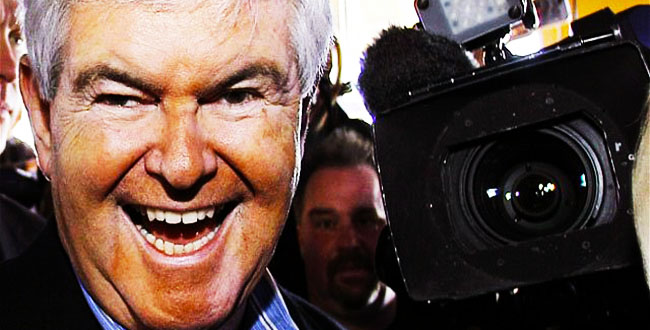 Newt Gingrich continued to put his entire lack of logic on display on Thursday when he criticized President Obama for apologizing for the desecration of the Qur’an at Bagram Base. Gingrich said Obama had not similarly sought an apology from Afghan president Hamid Karzai for the killing of two US soldiers by a uniformed Afghanistan National Army soldier.

But Obama’s apology was intended to prevent more US troops from being killed. And Gingrich has no idea if Karzai sent behind the scene apologies for the US soldiers’ deaths.

The US military holds Qur’ans at Bagram because they are distributed to captured Taliban in the cells there. It is alleged that inmates were writing on the pages and passing them on as a way of spreading radical notions or suggesting means of escape. The old Qur’ans were sent to be disposed of, but whoever was in charge did not know that burning old Qur’ans is sacrilegious.

In Afghanistan, old Qur’ans are either to be preserved in an attic, or if disposed of should be buried or allowed to float away in a river. Afghans are much more reverent toward the physical Qur’an than is typical in the Arab world.

The reason for which Obama apologized in Afghanistan has to do with the danger that eventually more will be killed if the demonstrations are not tamped down. There are tens of thousands of US troops in Afghanistan on a counter-insurgency mission that involves, in part, winning hearts and minds.

By loudly complaining in this way Gingrich is giving aid and comfort to the enemy. The Taliban are already calling for US troops to be targeted, and when people hear Gingrich on the radio saying that the apology was wrong, it might provoke a new round of demonstrations.

It is Gingrich who should apologize. It is despicable that he should play politics with the lives of US troops.

One Response to Gingrich Electioneering Puts US troops At Risk