Gaza Is ‘Paying a Heavy Price’ For Egypt’s Political Turmoil 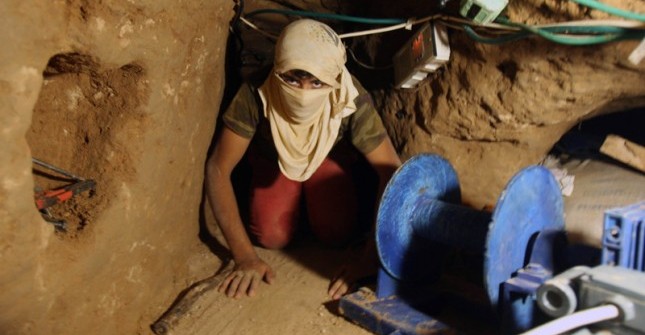 An air of uncertainty is engulfing most matters related to Egypt. Since the Egyptian revolt started over two years ago, the country remains hostage to a barefaced power struggle with many destructive implications that have polarized society in unprecedented ways, perhaps in all of Egypt’s modern history. And while in Egypt itself nothing is sacred and no one is safe from the massive campaigns of defamation, demonization and sheer lies that each political camp is launching against the other, Palestinians find themselves in a most precarious position.

Palestinians in the Gaza Strip in particular, are heavily dependent on their Egyptian neighbors. Six years of an Israeli siege, originally imposed to punish Palestinians for electing Hamas in an election viewed widely as transparent and fair, has culminated into a drama with international dimensions. This drama of course involved the Palestinians, but also Israel’s traditional benefactors – led, as always, by the United States – Arab countries, Iran, Turkey and more. Aside from the vicious nature of a siege imposed to punish a civilian population for making democratic choices, the siege has morphed to acquire multiple meanings.

On one hand, it further cemented the division of Palestinian political elites, as the Ramallah-based Palestinian Authority (PA) invested in ensuring the isolation of its Hamas political opponents. Notably, this took place after their brief but bloody encounters in Gaza in 2007. On the other hand, the siege positioned Hamas, whose survival was at stake, forcefully in a regional camp that involved Iran, Syria and the Lebanese resistance group Hezbollah.

The last development in particular was exploited by Israel in every way possible and certainly without much context. It subsequently attacked Gaza at will, killing and wounding thousands in the course of few years, in the name of fighting Middle Eastern radicals hell-bent on erasing Israel off the map.

Under ousted President Hosni Mubarak, Egypt served as a buffer zone for Israel and the US to isolate Hamas from the rest of the world. The Egyptian dictator also had his own reasons for isolating Gaza. Any success in Mubarak’s neighborhood for the Islamists, Palestinians or others, would have constituted a threat and would have emboldened Egypt’s own Islamists to expect or strive for a greater role in Egypt’s undemocratic political institutions. Moreover, by tightening the noose, the Egyptian regime at the time had hoped to strengthen its role as a major player in the US Arab camp of ‘moderates’, in exchange for financial and political perks.

The Mubarak regime justified its incarceration of Gaza as its attempt at preserving Palestinian unity. The logic was flawed, but also clever. Under the auspices of the George W. Bush Administration and full Egyptian involvement, Israel and Mahmoud Abbas’ PA had reached an agreement on Movement and Access at the Gaza-Egypt border in November 2005. Expectedly, the agreement was tilted in every way necessary to reassure Israel regarding its many security concerns. A European mission – The European Union Border Assistance Mission at the Rafah Crossing Point (EU BAM Rafah) – was hurriedly deployed to monitor the border. Those listed by Israel as ‘suspects’ were either turned back or detained. It was an Israeli operation conducted by Palestinian and EU hands, with full Egyptian cooperation. The Mubarak regime argued that opening the border under Hamas’ authority was a violation of the agreement and would have further divided Palestinians.

When Palestinian militants clashed in Gaza in 2007, resulting in the removal of Abbas’ Fatah loyalists from the Strip’s entire security apparatus, Abbas found himself on the very camp urging greater clamp down at Gaza’s border, especially with Egypt. The latter enthusiastically obliged. As Mubarak erected a barrier and an underground wall around Gaza’s 12k border, Abbas cheered him on. “I support the wall,” he was quoted in the Guardian on Jan 31, 2010. “It is the Egyptians’ sovereign right in their own country. Legitimate supplies should be brought through the legal crossings.”

Abbas of course knew well that ‘legal crossings’ between Gaza and Israel were meant to ration food and fuel for Palestinians in the impoverished Gaza, in ways consistent with Israel’s position, as reiterated by the then influential Israeli official Dov Weissglass: “The idea is to put the Palestinians on a diet, but not to make them die of hunger.” As for the other ‘legal crossing’ with Egypt, it had no commercial use, and it was heavily restricted even for individuals with health problems and students.

Following a lethal Israeli war on Gaza in 2008-9, known by its Israeli name Operation Cast Lead, Egypt moved even closer to the Israeli and PA position of choking Gaza. Gazans didn’t expect Mubarak to allow the seriously damaged place to completely recover from a one-sided war that killed over 1400 people, wounded thousands more, and damaged much of the place’s barely subsisting infrastructure. However, they did hope that Mubarak would open the border crossing on a more predictable basis; yet they watched in dismay as western security experts flocked to Egypt to fortify the Gaza border even further, before all of Gaza’s victims were accounted for.

Things have not always been this bad between Gaza and Egypt. In fact, in past decades, Gazans saw a strong connection, a bond even, with historical, political, cultural and religious dimensions that made them in some respects view Egypt as their respite, their last lines of defense. Historically, Egypt, which fought bitter wars against Israel, as other Arab countries conspired or capitulated, was in control of Gaza between 1948 and 1956, and again between 1957 and 1967. Even after the Israeli occupation of the remainder of historic Palestine, the political rapport was never severed until 1978 when President Anwar Sadat signed the Camp David Accords. A second phase of those accords put in place a ‘framework’ that would turn Gaza, along with the West Bank into autonomous regions.

While many in Egypt fully understand that finding a dignified and lasting resolution to the humiliation experienced by Palestinians in Gaza is a must, as they remain confined to a tiny space with no political horizon in sight, some media pundits are callously fanning the flames against the Gaza population and their government. They might’ve forgotten that it was Gazans that led the celebration of Egypt’s January 25 Revolution and it was their resistance that kept the Israeli army at bay all of these years. Then, no one truly knew what sort of political outcome the revolution would usher in. Most Palestinians seemed happy that Egyptians were gasping the air of freedom, and truly believed that what was good for Egypt was as equally good for Palestine.

It is only obvious that neither Gazans nor their government have any vested interest in destabilizing Egypt. Palestinians understand that a strong, stable Egypt would have to immediately tend to some unfinished business, one being the Gaza siege, and the other balancing out Israel’s untamed military arrogance in that area. Yes, Gaza has its religious zealots like any other place, but conflating that with a Hamas-Muslim Brotherhood plot to undermine the army’s presence in Sinai is another unsubstantiated claim aimed solely at fomenting hate against Palestinians.

When media reports confirmed the release of seven kidnapped Egyptian soldiers in Sinai that were received by President Mohamed Morsi at the Almatha airport on May 22, it was the Palestinians in Gaza who echoed the cheers of their brethren in Egypt. Aside from genuine gratification of their release, Gazans were also happy to see thousands of stranded passengers being allowed to cross the border after having spent six days fighting the elements and sleeping on card board.

Palestinians in Gaza feel humiliated and are deeply frustrated for paying the price of Egypt’s protracted political turmoil. It is time that the Muslim Brotherhood government of Morsi do some serious soul-searching and understand that Palestinians will continue to dig tunnels to survive if Cairo doesn’t reach an agreement with the Gaza government that would allow for commercial exchange and humanitarian relief.

Yes, Egypt has every right to secure its border, but certainly not at the expense of a besieged people who are tired of being subjected to ‘collective punishment’ or being used as political fodder. Additionally, they are most certainly tired of digging tunnels to survive.